Initially announced last November, Anker has finally released its most expensive wireless charger yet… Take a look at PowerWave 4-in-1 Stand! 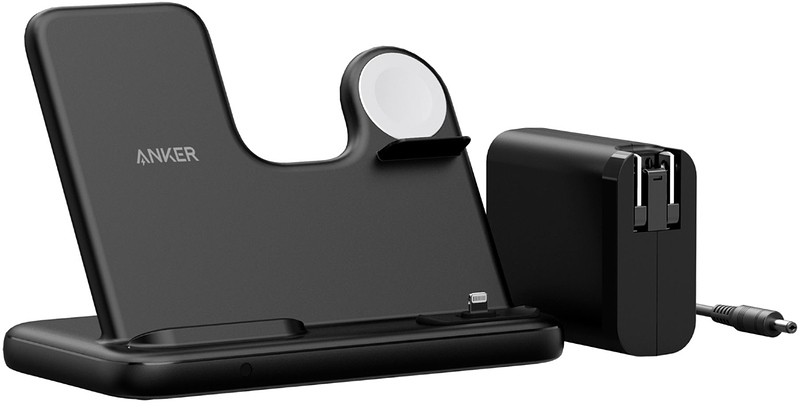 Pricing and Availability: Anker’s PowerWave 4-in-1 Stand is available to order now from bestbuy.com for $99.99 and should begin shipping immediately.

Are you interested in Anker’s most expensive wireless charger to date? Be sure to let us know with a reply!

That price seems a bit high to me

Lol I thought it was just me thinking that

The thing is, if you’re interested in buying this you obviously already have a means of charging your devices. Is it worth almost paying the amount for new chargers again just because you want one dock that does it all? I think not in most cases. I understand Apple have struggled with their original take on this 2 years ago but Anker still isn’t proving 3 wireless charging products in 1 pad. Seems like they’re just cheating!!

How is Anker cheating by not making a product that Apple announced yet failed to release? Not sure I understand…

I still think the price is high. By getting an all-in-one I would expect to save quite a bit.

I disagree with your assessment of pricing the lightning dock at $40. Yes that is technically how much it cost, but just getting a 5w charger and a lightning cable is much cheaper + 20 cents worth of plastic

Once you do that it takes the price to around $99 max, and I still expect savings getting an all-in-one.

pricing the lightning dock at $40

Just wait for the discounts…

Personally I’m not willing to spend that kind of money for just convenience. I know for a fact that I don’t use watch charger daily so that’s gone. I don’t have airpods and don’t plan on getting one so that’s gone too. For a charger, I prefer wired anyway because I would remove the plug from charging socket when wireless charger isn’t being used. If I were in India, I would probably leave it in because we had switches on all sockets to shut it down when not in use unlike here in US

If you don’t charge a watch or AirPods and prefer wired charging, then this product definitely isn’t for you… I can’t imagine you’d want it for free!

Lol no but if I did use my watch way too often to somehow drain it daily and had a wireless capable phone, I would probably look at the Pad+watch charger (forgot what the name is) since it’s cheaper anyway

There are economies of scale of unifying disparate products.

Why, when OnePlus and Huawei are up around 40W of wireless charging, is Apple able to claim 7.5W is “fast” ? I think they mean it is faster than 5W.

Given Apple’s mediocre 7.5W wireless, the mediocre 18W wired, all the technology from Anker is older and so lower cost technology. There is no inherent reason for this to be $99.

My bicycle is fast, it can do 20mph, the first internal combustion engine car could only do 10mph.

I can see an issue for an Apple user that these all-in-one tend to end up not so useful as the set of technologies drift apart as they evolve at different speeds. iPhone will evolve slowly for wireless charging so may become less-bad 10W and current Qi standards are evolving to much higher, the Airpods, watch, etc all will evolve at their own differnet unique rates. So this all-in-one will become less-fit to your needs more than buying the discrete separate chargers and swapping each out as your devices evolve.

My bicycle is fast, it can do 20mph

Yes, but we still all know that one guy who claims he can go 60mph on a bicycle

So I have a specific logical argument for these all-in-one and Apple.

So the iPhone 7.5W max is inevitably going to go to at least 10W, all the technology is already existing, mature proven. So if you bought this 4-in-1 with its 7.5W, inevitably it will be dated when iPhone moves to 10W.

Similarly, the Lightning cable has its days numbered as USB-PD is moving on and is 100W so the 18W limit will be removed when Apple ditch the Lightning port. So strike 2, your 4-in-1 is dated in 2 interfaces. Similarly with the Airpods (although probably slower, smaller cells charge slower).

So if you buy a 4-in-1, you cannot peicemeal upgrade each component, so it becomes out-of-date faster and it quickly downgrades to 3-in-1, 2-in-1…

I’d have a similar conclusion, for different reasons, with anything Android too. As Android is pushing innovation, it’s future is uncertain, there will be continual divergence from standards into proprietary, and so similarly you’d fine a 4-in-1 becomes 3 becomes 2 etc there also. Same conclusion from different causes.

You lost me at ‘Apple’ and ‘Lightning port’