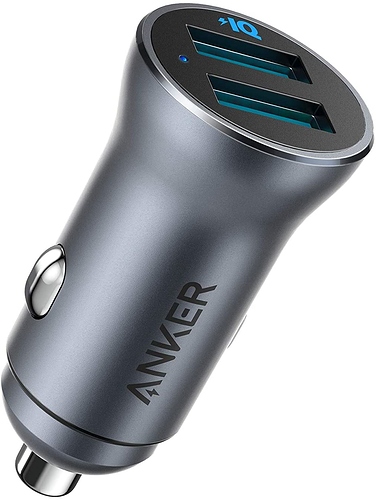 Pricing and Availability: Anker’s PowerDrive II Alloy 24W (Two Ports) is available to order now from amazon.co.uk for £11.99 and should begin shipping immediately.

Have you been waiting for Anker to develop a fast charger for Huawei and OPPO devices? Let us know with a reply!

Maybe I wrong, but doesn’t the latest version of VOOC charging go to 30w, not 20w?

I think so; this is probably the previous version.

One Plus Phone Owners! We need your help! General & Product Discussion

VOOC is superior to PD in that is does all the DC-DC conversion outside of the phone (helps with cooling so phone can be faster while charging) but causes a thicker and necessarily short cable.

The application within a vehicle has some logic I can agree with, as navigation is power intensive (GPS, screen always-on) so to have VOOC in a vehicle will cause a cooler and more-charged phone.

I drove 9000 miles across Canada and USA last year, I had OnePlus and Huawei devices. Guess what, my dual IQ3 18W with two Powerline did the job just fine. We only got a little lost around Wisconsin, Montreal, Toronto.

I am personally not looking forward to it, as I am Apple (majority devices) / Samsung (3 devices ) user.

Will This charger work with Apple / Samsung devices, limitations?

Yes, though no fast charging for those devices.

I’d expect a common denominator of 10W to happen, so no faster than an IQ port.

Once Graphene cells get into phones, this topic of interoperability is going to explode into a big fat “what the !?!?!” consumer reaction. Currently wired charging is limited by the uptake limit of Lithium cells, if you push energy too fast they melt, so you struggle to get a reliable charging in phone cells much above 18W, you get some benefit 0%-60% but little 60%-85% and none 85%-100%. Graphene will blow that limit away and it will become inverse linear (double Wattage = half the time) and so you’d see a much higher Wattage charger and significant objective performance improvements. The consumer will then look at standards and at Anker and see a much bigger impact of not buying the vendor’s own charger.

Probably not a problem for OnePlus who only come out with phones, and 10W enough, but Huawei and 45W laptop in car charging is going to cause a big consumer gap.

I had this conversation in the public consultation period with Caltrain in San Francisco. They were consulting on what in-cabin power to supply in new trains. They argued to have USB ports, I countered USB technology is evolving so fast, most of the life of the USB socket would be comparatively useless, like say now it was 1A 5V 5W would look laughable. I argued they’d be better with just lots of AC 110V ports and users plug in their chargers which would be 100W in a couple of years.

Will be good to get the graphene being used!

The consultation for caltrain was an interesting insight… Have never had to use caltrain so far.

Anker’s PowerDrive II Alloy 24W (Two Ports) is now available to order from amazon.co.uk for £11.99 and should begin shipping immediately.

Thanks for the update.

The electronics geek in me would love USB consortium to allow 5A and 5V so 25W. Until then these proprietary protocols win.