There are widely conflicting reports as to which PowerCore and Astro portable power banks support pass-through charging. This being the ability for the Anker power bank to power a device, while the Anker unit is itself charging or at least plugged in.

Has this feature been removed from all Anker portable chargers?

I know that my PowerCore+ 26800 does not. However, I believe that some of Ankers power banks support pass through. I’m sorry to say that I’m not sure of which ones.

@AnkerSupport maybe you could help him out?

Hopes it help and please let me know if you need any further help.

2 Likes
Using a small power bank as a "UPS" for an internal surveillance camera
PowerCore USB ports state while connected to a charger
professor March 12, 2017, 10:42am #4

Fusion is pass thru surely?

I’m not a big fan of pass thru. One my other brands was a high end and and it was plugged into the car and then into my phone. It nearly burned out the device and phone.

As Anker says the stuff I found says no as well. So.e of the earlier products might have it. But I wouldn’t use it. If Anker doesn’t like pass thru charging I don’t either.

I’m getting a second charger so if i forget to charge one or need an extra charge I have one and don’t to charge on the hub when i need it.

Your power core would be charging, until you unplug it at which point the phone would start charging

Yes, the fusion is pass through.

Kind of, I can’t remember the sequence but I think you have unplug replug to make it work in some situations.

Wouldn’t it be as simple as to sense if there’s ENOUGH or none power at the powerpack input, so a relay (or solid state circuit) switch the pack output to the device being powered to be powered from the pack, and the power input disconnects. By the same token, when there’s power, it’ll disconnect the pack conection to the device, and the charger will power both the pack and the device? That’s in essence what we do manually with the pack; when there’s energy available, i power the device AND charge the pack with the charger (well, there are two chargers, one for the device and one for the pack, but a powerpack charger can integrate both), so when there’s no power available for the charger, I power the device with the power pack and disonnect it from the charger.
I have the need to power a wireless camera/cellular hotspot combination that has an unreliable supply of energy, so the solution I HAD to install is a small UPS to power the camera and hot spot adapters, instead of a dual output pass-through powerpack that may be a more elegant and cheaper solution.

I use Anker stuff typically however Omnicharge supports passthrough , I would love to see Anker do this as well, Omnicharge proves it is possible, come on Anker make it happen , would love it (

They aren’t saying it’s not possible… They chose to disable the feature. 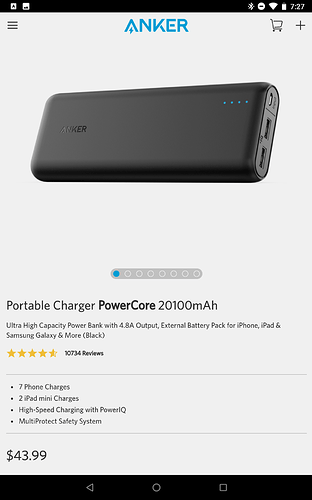 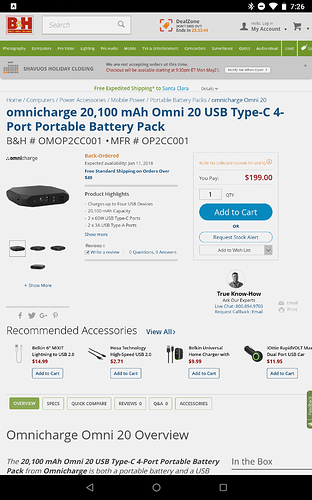 One place it would really help is with solar charging, for example when camping. I could leave the solar panel connected to the charger input while still charging my phone.

I’ve found that my phone will draw from the solar panel at the lowest current it sustained and not try to increase, so if a cloud passes over I lose out on how fast I can charge the phone. I can charge from the power bank which will maintain consistent output, but with the solar panel disconnected I’m losing out on potential benefit from it.

On cloudier British days it can take a long time to collect enough energy to make up a phone charge never mind phone and camera, with my supposedly 15W panel only giving 1W or so.

Still going to be a (much) less efficient solution…

I camp in UK and use Solar, but only on the longer ~ 1 week long because a solar panel weighs the same as 20000mAh battery, so in a shorter trips you’re better off carrying more battery than a solar panel. In a sufficiently long trip eventually batteries are exhausted and it shifts to worthwhile carrying solar.

Pass-thru doesn’t help. You can get the same benefit using a dual-socket solar panel to make good use of brighter sunny times.

No, Fusion does not have passthrough, but rather mode switching. Per https://www.amazon.com/Anker-PowerCore-Portable-Charger-Foldable/dp/B01K702S66 :

PowerCore Fusion charges itself and other devices from any AC outlet. It first charges your device then recharges itself (in 2.5 hours)—ready to be taken on-the-go.

To recharge PowerCore Fusion, disconnect external devices or press the button—charging will commence after 30 seconds