The European Championships Are On, And You Could Win! 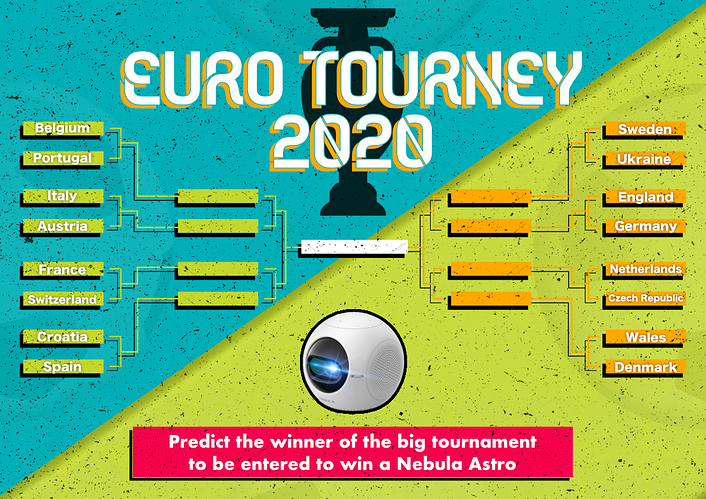 The competition has closed and a winner has been contacted.

One of the world’s most fierce competitions is underway, and the winner is finally going to be decided! That’s right, will it be team ‘soccer’ or team ‘football’?! Just joking, it’s obviously football.

In other news, the Euros have started and the best football players in the world have come together to represent their countries and try to bring home one of the biggest prizes in sport. Part of the excitement for this tournament is thanks to the live crowds being allowed back into the stadiums after a year of watching from the sofa. If you can’t get tickets or can’t travel to the games though, the best way to watch is undoubtedly on a Nebula projector’s giant screen. And we’re giving one away! That’s right, we’ve got a free Nebula Astro up for grabs.

All you need to do is tell us who is going to win Euro 2020. If you guess right then you’ll go head to head with everyone else who guesses the winning team in a live-streamed Ragdoll Soccer knockout tournament on July 16th!

The best part is that you don’t need to know a single thing about football! Anyone can enter (as long as you’re based in the UK or US), guess a team, and then play in the Ragdoll Soccer tournament.

You must leave your guesses below before Midnight PST (GMT -8) on June 26th. Let’s goooooo!

I go with Spain! Its purely random.

As far I see there is no USA team.
So why USA and not Germany.

It would have been much more interesting to fill in the “blanks” of the sheet,
not only guessing the European champion.

I’ll throw my guess in with Belgium!

Even thought they didn’t look great in group stages in going with Germany like I have every year since I was little.

France for the win.

That bracket is a killer. Belgium, France and Spain all being potentially pitted against one another is going to make for an interesting tournament.

France is still going win though

What do you think who would be playing in the finals?

I can not take part I am from Germany.

It’s gotta be France for me, they have the highest odds for sure. There are a lot of strong contenders this time around so it’s anyones ball game but I’m going to stick with France.

You never know. In the US college Marshall University a mid level college from WV that ended up beating several of the big dogs in US college soccer.

I know nothing about soccer so I’ll just take a guess, Spain.

The answer is: FRANCE

Being a Englishman…COME ON ENGLAND!

Spain I guess because usa is not in there.

I know nothing about soccer

As a child would meet other children in an area of grass and play kicking balls around. I never understood why I could watch someone else do it.