Tl;dr: everything is perfect except for the micro-B port.

A while ago I set out to migrate everything from micro-B to USB-C: my AA/AAA battery charger, my Nikon DSLR battery charger, a Sony compact camera battery charger that I added. I guess it started when I got the Sony WF-1000XM3 earbuds to replace my old ones. The case of that also has a USB-C port. I wanted everything except my phone and my beard trimmer to have a USB-C port. I thought the final thing to be my laptop, which is a 7 year old Apple machine. But I think I’ll hold out for the rumored M1X equipped machines.

When I say “everything”, I mean everything that I might take with me on a trip. And from that, most of the things I use in and around my house. When I say USB-C, I mean the port on the device itself. Since there are no 4 or 5 port USB-C only chargers, the supplying end remains USB-A in most cases. The exceptions being my phone and laptop.

Why this strategy? Because it makes life simpler. I just need cables with USB-A on one end and USB-C on the other, and a few specialized cables, and that’s it. I can use the same cable for charging a power bank from my charger, and for charging a device from that power bank.

But reality is a little bit more stubborn. I got an Amazon Kindle Oasis. Very nice device, but it has a micro-B port.

The Anker PowerCore II 6700 then. I needed a replacement for my PowerCore Slim 5000 because its battery started to swell. I used that Slim 5000 with my iPhone 6S, but I had upgraded to an iPhone X since then. That Slim 5000 was only able to charge it about once.

The 6700 can actually do almost double that. I charged my phone from 10 to 1000 percent one day, and then from 20 to 100 the next. This is better than I expected, but it was exactly what I was looking for. It also has 6 LEDs instead of 3, so it more precisely indicates the remaining power, which my OCD side likes. Lastly it remains a lot cooler than my old Slim 5000, which is giving me peace of mind. The form factor is a slight disadvantage to the Slim 5000, but I think I still prefer it over the slim 10000mAh banks out there.

Plain and simply put, this power bank just works for me. It does a lot of things right and not many things wrong. It’s apparently super efficient, it’s still small-ish and pretty lightweight, it doesn’t get hot and I like the 6 LEDs. I know I can depend on it.

With all that in mind, yes, a USB-C model would be better. I hope Anker will bring out a successor to this guy that has that port. But in the meantime? I’m covered.

They have plenty of USB-C products, just not that form factor and size.

There was a 5000mah rumoured but didn’t manifest 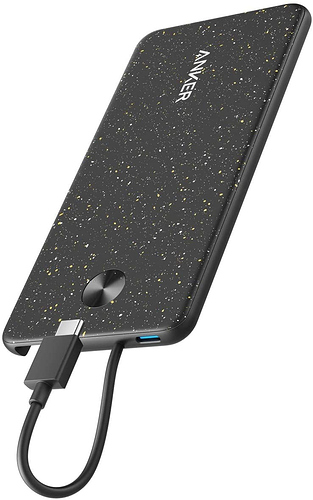 They seem to have settle on 10000mAh as their smallest 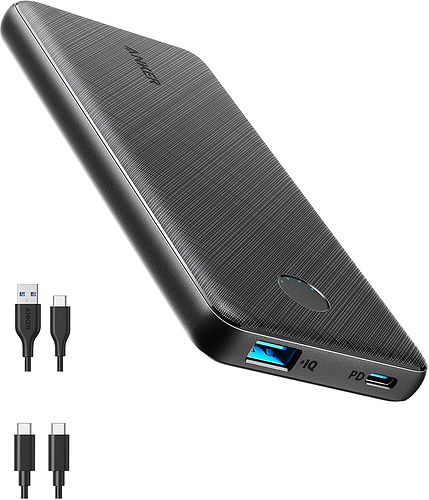 “There was a 5000mah rumoured but didn’t manifest”

It did manifest as a version with Lightning cable and port. Which actually would be ok for me as well. But it’s not available in the UK. Plus as I said, 5000 mAh is perhaps not ideal for newer phones.

I find my use of my 6700 II to be seasonal, more so winter walking when I have a coat, phone in one pocket an 6700 II other. It is sufficient power to last the longest of such days and counter balances weight left/right of jacket.

I agree with you, 6700 is a good size and a USB-C would be even better, but I doubt such will exist, so just make best of what does exist.