You will be happy to hear that our efforts to update and improve eufyCam have not stopped! We have successfully delivered the following new features to the eufyCam/eufyCam E:

We also are planning to add the following features over the coming months, so stay tuned：

Here is the latest software timeline for the second half of 2019. We are prioritizing the features that you have indicated to be most important via Kickstarter, the forum, over the phone, and by email.

We appreciate your support and patience, as well as your enthusiasm and positive feedback. We will continue to improve eufyCam in anyway possible.

Please stay tuned or reach out to us with any questions!

Has the range extender been released yet?

Congratulations @AnkerOfficial and Eufy Team for these accomplishments

Thanks for sharing these details with the community!

We have already supported the Wi-Fi Connection feature of Homebase in Q2, suggest you try it.

@AnkerOfficial I believe @TechMan is referring to the range extender hardware that was reported to be coming to market due to the range issues numerous people were having…or does the WIFI connection feature allow any WIFI hub / extender to be used for the camera to homebase link?

Where did the ifttt development go?

Thanks @AnkerOfficial for the long awaited eufycam updates.
Now we can officially forget about IFTTT and range extenders, sorry @yamyam

But your other wish sensor triggered recording feature is added to the timeline.

so be happy for that.

What about Apple HomeKit support? whether current hardware support that or only eufyCam 3.0 will have that feature??

I heard that the cheaper alternative camera Wyze is also planning to launch a battery operated camera in the near future.
Better to hurry up and show the difference @AnkerOfficial 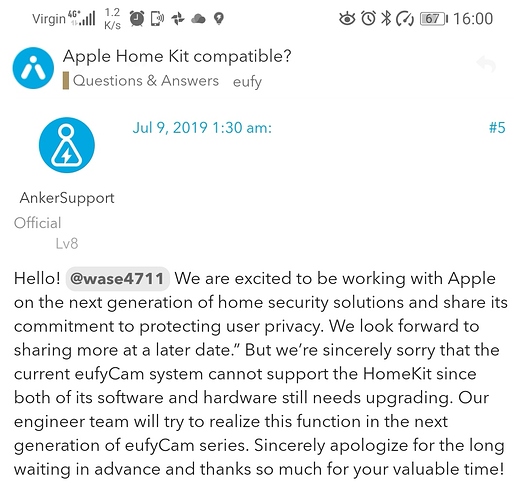 Why do we need geofencing, if you focused on IFTTT then that would sort this anyway.

Now we can officially forget about IFTTT and range extenders, sorry @yamyam

Who says/said this?! Personally, as i do not need it, i do not care about IFTTT but its sad for others, if its not coming. But if they will cancel the promised and announced eufy cam range extender, an earthquake will be a kiddie playtoy compared to what will come over eufy then.

But havn’t read anything about an official statement where eufy/anker admits that they are to incompetent to realease a simple eufy cam range extender hardware! And i do not see a reason why they should, i bet there would be tons of companies who would be able to just “forward” or “stregthen” the eufy cam own wifi signal easily! As i said some other thread, they do not need to reinvent the wheel, just to finally bring that little hardwaretool which does nothing else then finally delivering the range we need and will make the eufy cam useful.

I guess you misunderstood the post from @AnkerOfficial above, as same as @TechMan and others.

To connect the homebase not only by ethernet, but also by wifi now, had been added silently some time ago. Yes. But this has NOTHING to to with any range extender or extending the terrible range of the eufy cam!

The range extender is still on the timeline and also the most wanted and needed “tool” or feature currently for a lot of customers. And it would be more than a shame and reputation loss, if they would admit that they are to incompetent to deliver it finally!

The range extender is still on the timeline

I don’t see it any more

IFTTT adds so many functions like when a sensor or camera detects movement enable my Philips hue lights. Or when sensor is open for x amount of minutes send a text message.
Or when my sunscreen goes down, set camera backyard to snooz.

Correct, and thats why we need the promised eufy cam range extender finally.

I don’t see it any more

@Ice1 Just because you don’t see it anymore, doesn’t mean it doesn’t exist anymore!
At least in thousand personal timelines. And if they dare to NOT bring the eufy cam rabge extender, the watermarkgate shitstorm will be a lowlevel shitstorm compaired with what kind of shitstorm then will come over them! And not only here, also on every big social media platform.

The eufy cam range is useless, horrible, a disaster!
They promised it, we hardly need it, NOW DELIVER @AnkerOfficial !

I believe it when I see it.

when I see it.

Explain to me why @AnkerOfficial should shoot themself again in the own foot?!
That would be just more than dumb and the admission of their own inability.

IFTTT integration, please. Done right, it exponentially increases the functionality and usefulness of a device. Without it or something similar, a manufacturer is on an island. Home automation is about integration, not isolation.

I have five eufyCams. I purchased them expecting to one day integrate with all my other IFTTT automation. As a stand alone system, they are good. However, I will deeply regret buying them altogether if we never seen IFTTT support. Call me a fool for assuming any manufacturer wanting to be a major player in the security market would choose not to integrate with other vendors.

I agree totally with you, this is actually a must have.