Hey all, hope all is well with you and that you are having a great week. I have been using this power bank for about 2 weeks now and honestly think it is great. Happy Reading! If you have any questions or comments please feel free to let me know. 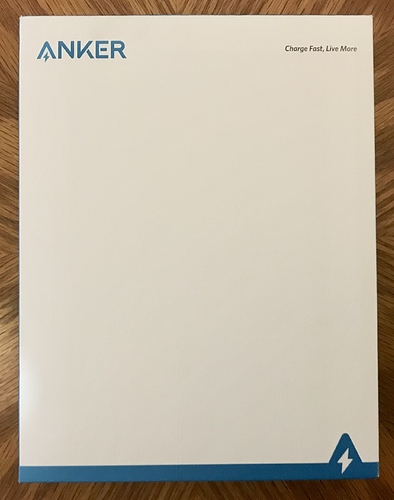 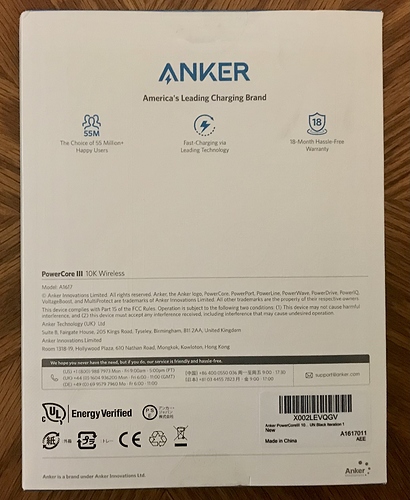 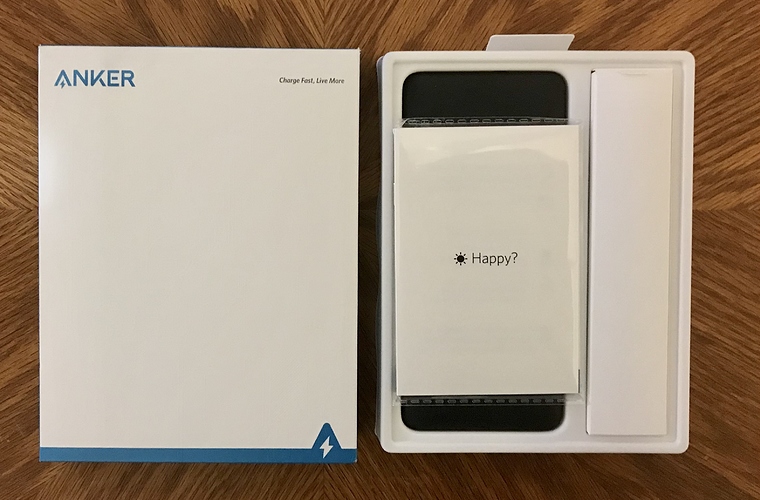 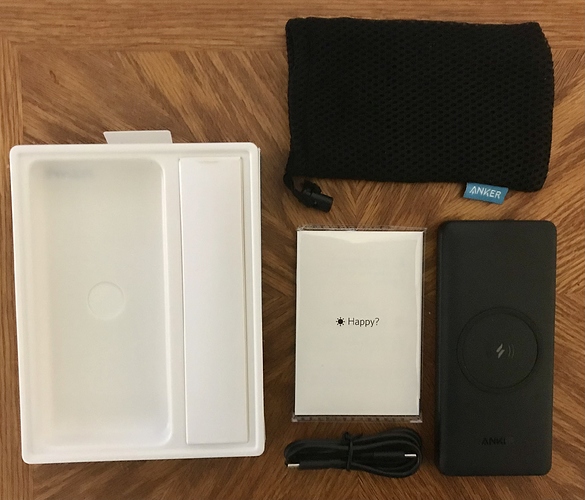 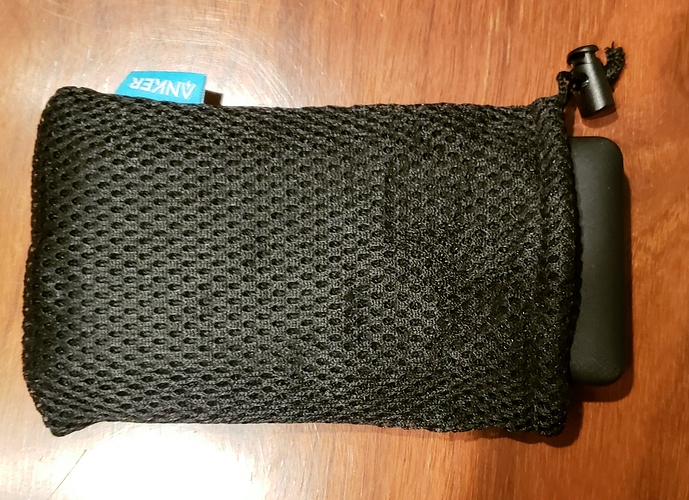 The power bank is clean to look at. The top size has a nice texture with a small rubber ring to help with aligning the wireless charging and prevent sliding. At the end of the power bank is the USB C port, the USB A port, and the power button. On the side are five LEDs. The first led is for the wireless charging status. The other four lights are for the battery level (out of the box the battery was dead for me personally) 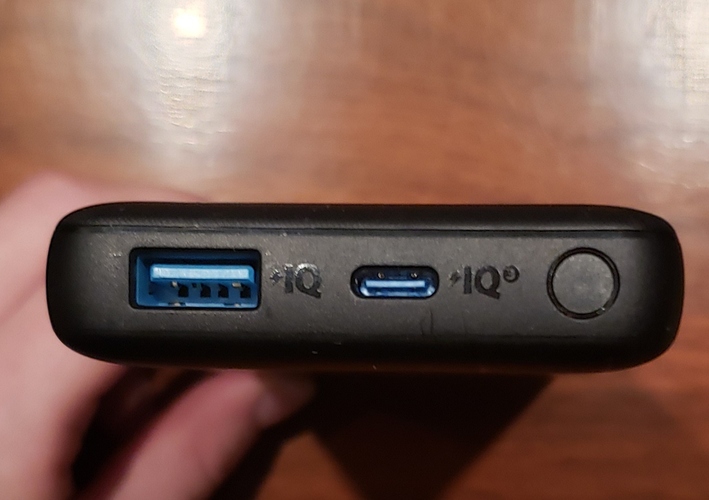 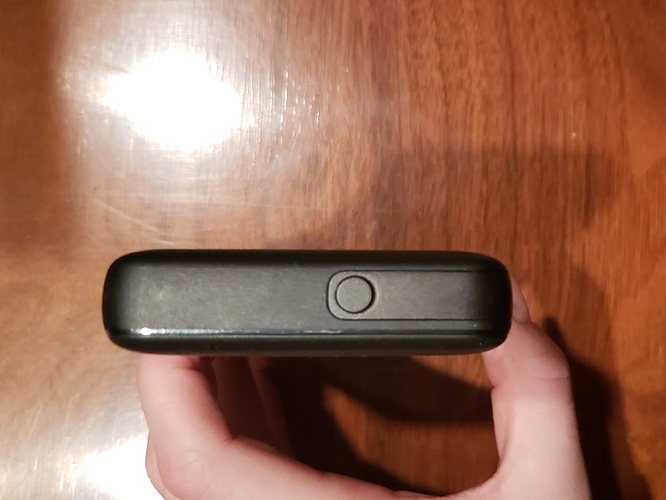 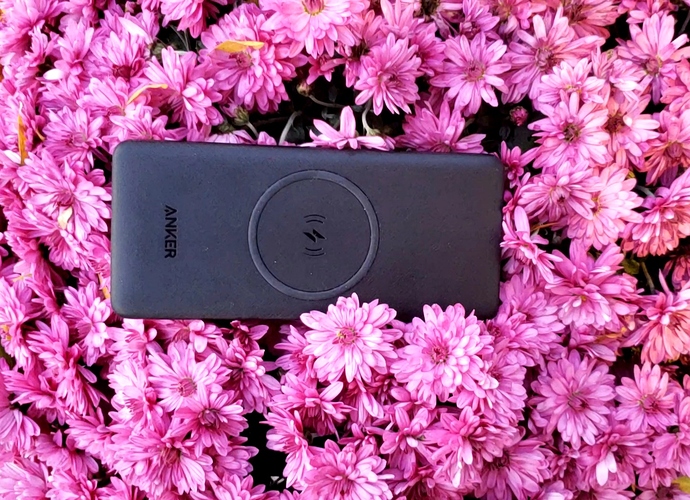 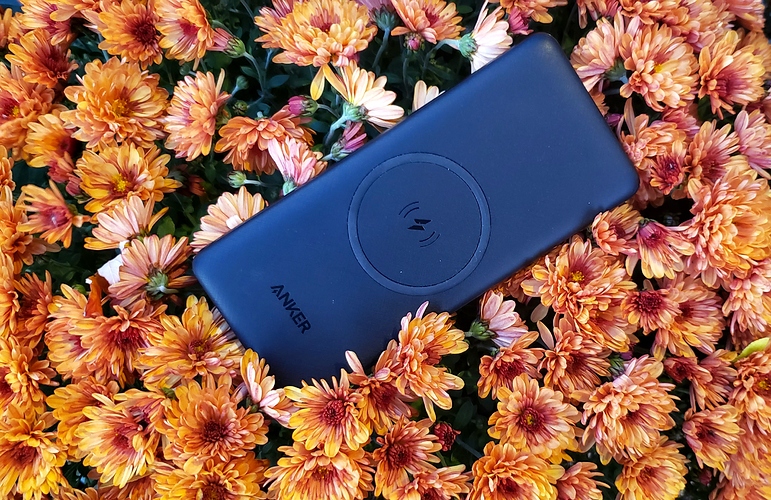 As seen on the Anker website the power bank has the following: 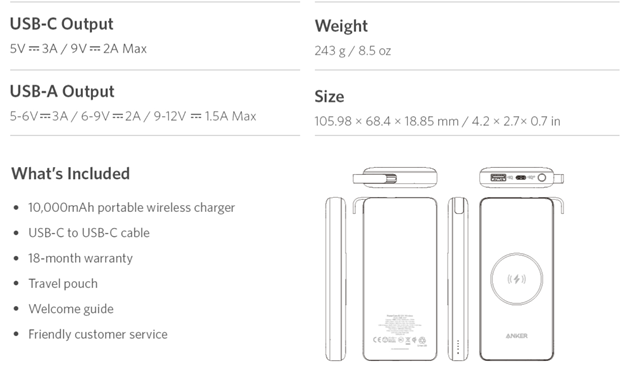 It also has a Wireless Output of a max of 10W 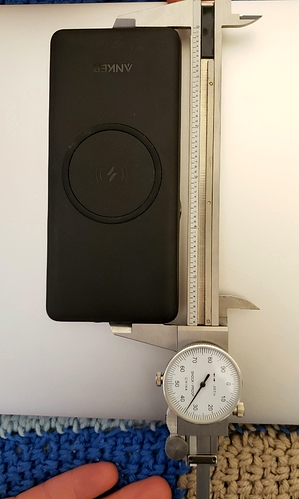 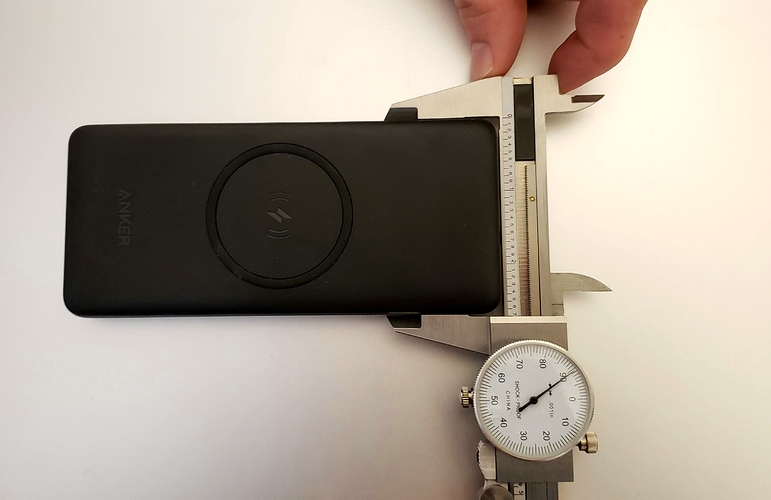 I found this interesting that the site measurements are off and is definitely something that should be fixed in the future. Also, it makes me wonder if this is why the pouch is small compared to the power bank. Regardless I hope they update the site to properly represent the size and dimensions of the power bank to not lead customers astray. However, on the Amazon site, the size seems to be correct. 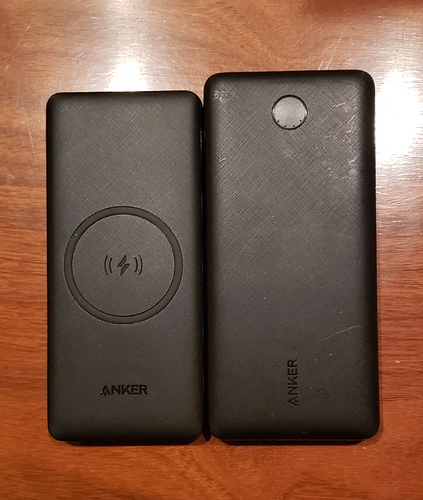 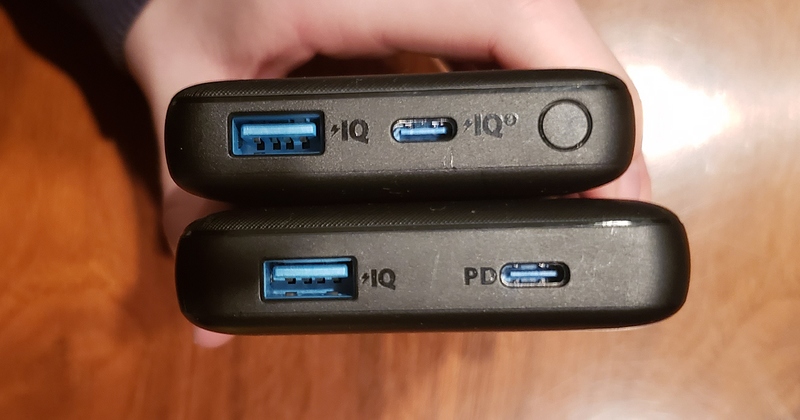 In order for the power bank to wirelessly charge your phone, you have to first press the power button. This results in the four power LEDs and the one Blue LED to turn on. Once you place your phone on the power bank the blue LED should go solid blue to show it is working. I tested this with my Samsung Galaxy S9 phone with a relatively thick otterbox case on it to see how well it would work.

How Fast it Charged My Samsung S9:

After fully charging my phone up wirelessly the battery still displayed four full LEDs however I’m thinking its probably towards the end of that fourth one and more like 75% of the battery left. After done charging the blue light flashed for a little and then turned off to not waste more battery. Surprisingly neither my phone nor the wireless charger was really hot after. They were at best a little warm but that is all.

The power bank makes it easy to line up the wireless charger. The nice circle in the middle has a grip to prevent the phone from slipping around while charging. The phone can be lined up nicely and even allowed for charging through my thickest case that is made by Otterbox. It also worked with a skinnier case and no case. 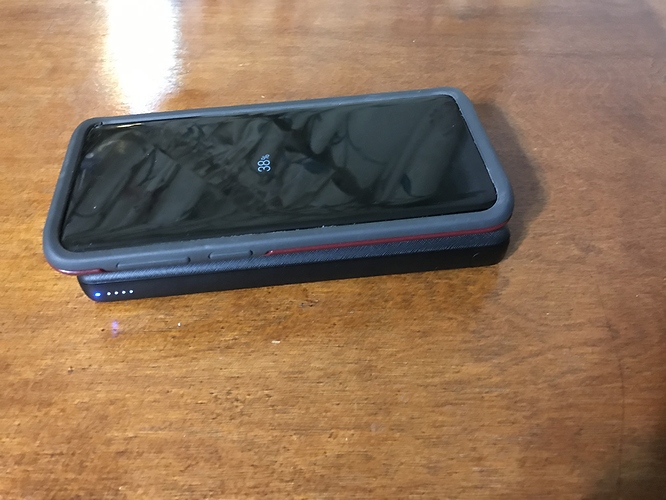 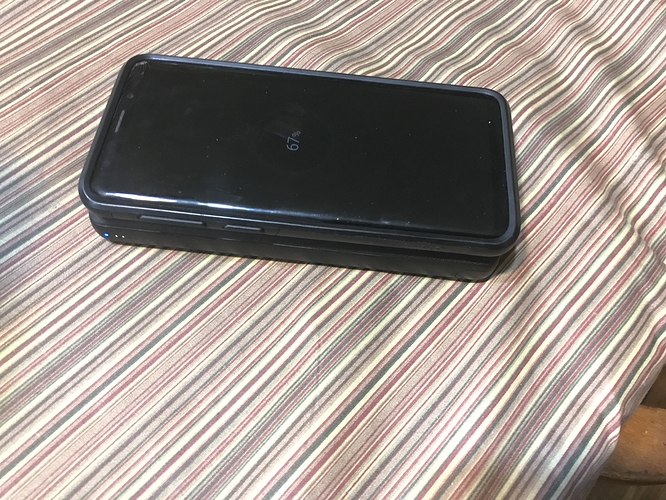 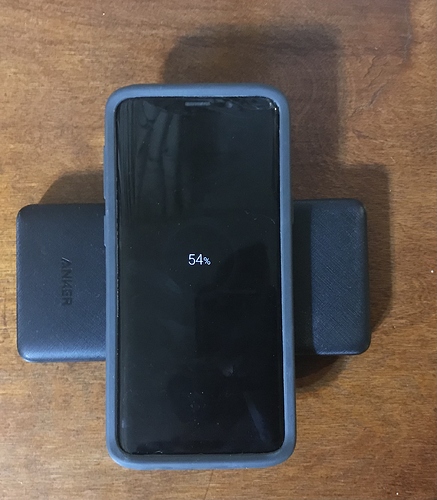 USB A and USB C Ports of Charging:

After charging my iPad the power bank had basically no charge left in it or at least 25% or less. 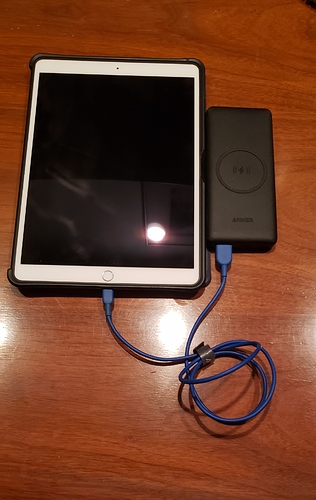 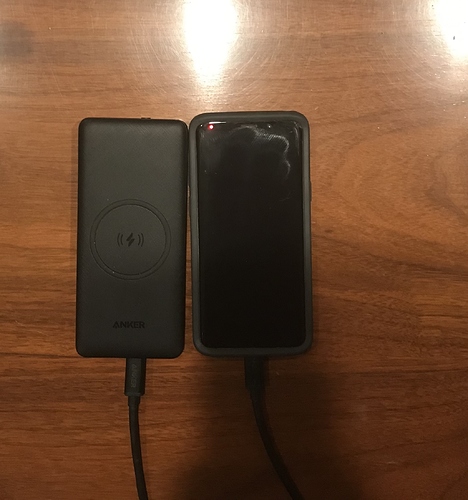 Recharging the Power Bank:
It took 4 hours to recharge the power bank. After the first hour of charging the power bank had at least 25% of it charged and was working on the second LED. One thing that I noticed was that when you plug it in to charge it automatically tries to wireless charge as well. I am not sure if this is the most effective when trying to recharge but could not find a way to stop it. To charge I used an Anker Powerline +III USB C to USB C cable and the Anker PowerPort Atom PD 30W. You could use the USB C to USB C cable included to charge as well. It is suggested to use a charger that is at least 5W to recharge it.

Additional Features:
Built-in stand
The built-in stand slides out at one side at the bottom of the power bank. I personally think this is a great feature to have. I am a little hesitant every time that I slide it out because it does not always feel the strongest. However, that being said it does a great job of holding my phone steady. It does however not fit all of my different cases. My Otterbox case doesn’t really fit but still kind of works but is not always the best choice. This is a feature I like but honestly don’t see myself using often since my case doesn’t fit very nicely in it. Also, the placement has me a little hesitant of it breaking either off while in use or being dropped. Thank being said it is a little stronger and thinker piece of plastic than it looks like. I wonder if Anker considered making there be a kick-out stand that may be folded out of the back and a little lip on the front to have the phone stand up and wirelessly charge. 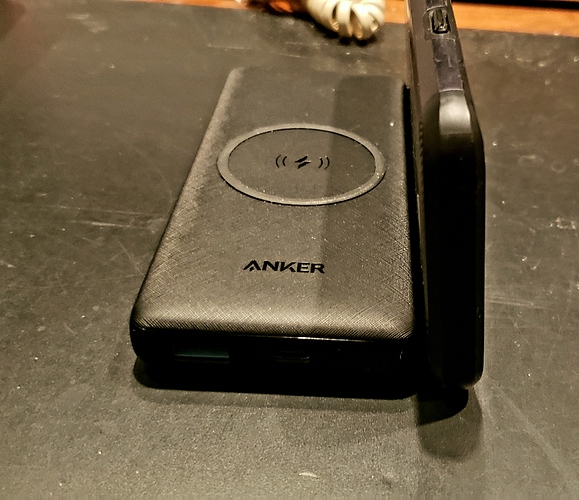 Wired Desktop Wireless Charger
I love this feature a lot except. I think it’s great that if I forgot to charge my power bank I can use it as a desktop charging pad instead. This is great because with school I am often picking up and using my phone and the wireless charging at a desk is such a nice feature to have. 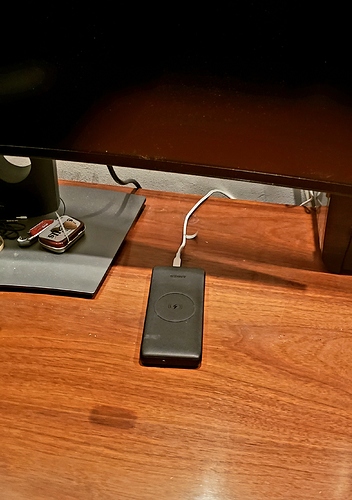 Trickle Charging
In the user guide, it is advertised to have trick charging which is best for charging devices that do not have a strong power draw such as earbuds. In order to enter this mode, you have to either press the power button twice or press and hold the on button for two seconds and the first LED next to the blue light will turn green. To exit this mode press the power button once.

It also should be noted that the power bank comes with a user-friendly 18-month warranty. From past experience not with this product but with a cable I know this will be a great thing to have in case something goes wrong and Anker customer service is the best I have ever had to deal with.

I think this is a great power bank especially for the price. I think it completes all the possible need someone could have. The only real issues I had was that when it charges it also tries to wireless charge, it rattles a little for reasons unknown, and the travel case is a little too small. I strongly recommend this power bank to anyone in the market for one currently (even if you aren’t, I would still buy it).

Here are the links to buy it on Amazon:
Amazon USA
Amazon UK
Amazon DE

Hope you all enjoyed my review this is my first for the We Love Testing Program so I hope I did well.
Thank you @AnkerOfficial for this opportunity!!!

That was avery well written and informative review! Congrats on the Powercore wireless. I loved the pictures of it in the flowers

Oh yea. I would honestly like a pouch that isn’t too tight or too small so all of the powerbank is covered. And as you pointed out, could very well be a mistake on their end when designing and building phases. Also the rattle could be something wrong with that powerbank or because of wireless charger (which wouldn’t make for a very valid reason tbh).

Great written review @ktkundy! Idk if you talked to Pei already but you should since he would love your opinion and point out the shortcomings to the designated team

I agree that the rattle might deal with the wireless charging but it’s just a little unsettling in my mind. Usually, something rattles when there is a problem which is never good. Personally, I don’t mind the rattle as long as it works.

Yea small things like these lower confidence in products and companies

You wrote a perfect review,
but there was nothing else expected from you!

Excellent review. I could not have done better if I had it in my hands.

Yes, healthy skepticism of Anker’s Amazon erroneous size / weight, which is why reviews are superior.

The rattle is obviously the stand, that aspect is worthless gimmick, I doubt the next version will keep it.

You are a worthy selection for future testing.

Thank you so much! Glad I could meet your standards. And yeah the stand definitely in a feature that I liked in the idea phase but a little less practical in execution. I’m not sure is that is what the rattling is though because it doesn’t feel loose

Such a nice review! It was so thorough and informative. Great pictures as well (I like the flower ones)

Thank you so much hope you enjoyed it !

Thank you really hope you found it helpful and enjoyed

First off, thanks for the all the eye candies.

Glad you enjoyed it! Thank you so much! Hope you have a great week