It has been discussed here before that program ended some time ago, with the move to selecting “influencers”, some of the existing power users still get asked to beta test but the program has closed.

Tried to search before posting, thank you for the info.

Anker/EUFY/soundcore changed their marketing propaganda.
Mostly those “testers” are found on “unsocial” media and do their influencing there.
Hope it helps to increase number of customers.
But we few here, the last and lonely regulars, the dinosaurs will never give up.
No more “Power users” we are, but we still have a lot of Power!

I had tried for power user about a month ago. Funny thing it was pending all this time and I thought how long before I got rejected. Lol. Makes sense now.

I actually think beta would be more fun as this is similar to my current job and I think that part of the job is fun.

I figure the brand is big enough that they have enough influences and that power users are in the past.

I wonder how they will select Beta testers now. I know the soundcore app has something for beta testing as well as the Eufy security app has had two beta testing items there recently on a link in eufy app as well.

They have the inside testing but that is not a beta testing but a review for a recently released item.

Lol even if it gone, you still have a badge for it. Lol

I always gave fair reviews for the everyday person, but didn’t have a massive social following. I’m guessing they do not find a to ROI with it. Oh well, long live the power user badge

I feel like this program kind of died a while ago and the site was just kind of there.
I was never a beta tester and my application had been pending for at least a year. Guess I wasn’t social enough for them. I’m pretty social on the community here though

I think they have collected a set of trustworthy beta who have proven to not leak or hint at beta products, they have nearly enough of those. They did send a beta tester request email out a few months ago as they probably had some gaps in testers.

Where I disagree with Anker is their throwing of product to folks making videos, I’d like them to stop sending to unboxers and those who just say it’s a great product. Waste of the Internet to tell you what you can figure out off a web page.

It made sense to also stop the “we love testing” events as they bombed by people simply wanting free stuff.

Low cost products I’d buy on a “why not” basis or with only needing the slightest of reviews, but the expensive ones I need in-depth critical pro/cons known weaknesses meaningful reviews. Such reviewers do exist but they are crowded out by waste-of-time-unboxers. 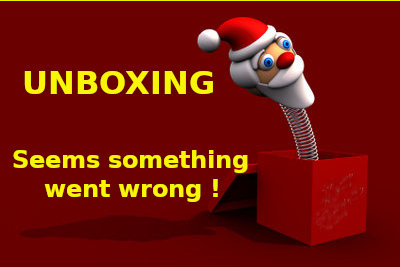 A lot of the power user area had become product discounts for a while, and then dropped into being almost nothing.

I think some of those in the beta testing program mostly dropped off of activity on this forum, possibly in favor of doing that. I asked about being involved in betas at one point, but hasn’t happened and no recent survey emails in my inbox either.

It has always been a challenge to get solid reviews on expensive products that aren’t “this stinks, I want my money back”. If you are willing to drop the money on it, and it works well, mostly you don’t think about it again. So the incentives are all wrong.

I would love it if Amazon would show the number of products sold, the number returned through them, and then the number / type of reviews. That would give some real data to compare products.

I applied when I first joined the website but never got accepted lol. However I’ve been lucky to win a few items so I’m complaining

Well, I waited a few years and maybe should have done that earlier. .lol.

I thought what the heck… They can just say no.

They can just say no

They actually never said no, it just said “pending” lol that was their nice way of saying no

I still see the page for Power User… as well, like other said, Beta Testing is better than the power user testing (participating now for one more testing)

Also, the link for Power user page – just in case if someone is interested : https://community.anker.com/testing_club

Î was never invited to do such beta testing.
I’m sure Anker knows about my neanderthalean equipment.
Never could do such a qualified testing lacking of modern devices.
So I really dont care at all.

Yesterday I trashed my 10 years old keyboard.
Not so easy to get a good replacement.
Many of the cheap ones are “loud” and have a bad keystroke.
I found one in my limitless magazine in the basement.
Works but not satisfying so much.
So I will buy a better one.

But I have to test in a computer shop.
I will do an alpha test!

It is done on a upcoming release basis. Those selected are sent an email questionnaire and follow a process when/if selected.

I think Power User programme was an amazing idea and really worked for Anker. They’ve managed to get a lot of love from their users and helped to built up a great reputation.

I’ve got quite a few products thanks to it and it got me talking to everyone I know therefore bringing more customers to Anker.

Shame it’s over but I think it’s served its purpose. Thanks Anker.

There was the “We Love Testing” page that showed some items. It used to be that you would click on the power user link in the drop down (https://www.anker.com/poweruser), it would link to devices that were available to test/review along with your previously tested devices. Now it just redirects to the homepage. 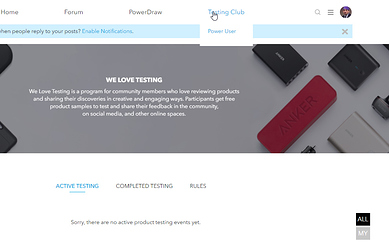