With the current breaking of our community, I would like to see if I can offer some suggestions. I know it may not be well received, but a daily posting limit may be in order. I have not seen this in the 2 years+ I have been involved but now that it happened a change may be in order. Would also like to see something like either a text message verification to out bots, or something along the lines of you must change your user image to be able to post. This current issue makes it hard to stay involved. Would also like the dismiss post button available at the beginning and not the end (scrolling through 600 threads just to hit delete is brutal).

I fear with the activities of the last two days people will struggle to see legitimate posts like like.

I use an iPad to visit this forum and don’t have to scroll too far to get to dismiss, i scroll to the bottom of the current page and get the dismiss button - it’s been used a lot today

Fingers crossed the problem will be over soon. 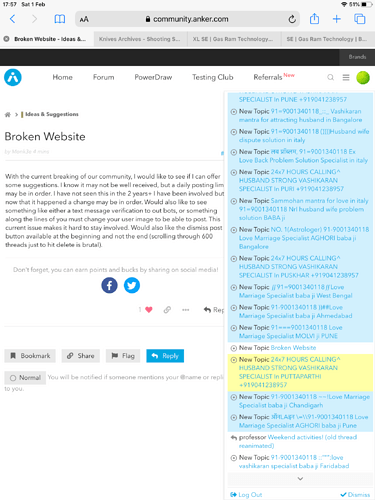 I’ve been here since the very beginning of this community and have never seen anything like this.

I think in these situations they should take the forum down for a period.

Neither have I…they seem to have happened upon a perfect storm moment, what with Chinese New Year etc, etc

When I logged on just now, there were 1637 “new posts.” Hope whatever is broken gets fixed soon.

Let’s thank Anker for including a “dismiss” option!

I got on last night and saw that there were hundreds of spam posts…before I realized they were spam. I thought to myself, “I’m going to be up all night going thru them.”

Then I just clicked on “UnRead” and went on my merry way. Hahaha.

I feel bad, if anyone needs actual help or advice at the moment Ill miss it. Looking through 400 posts for 1 non spam 1 is just too tedious.

It’s sickening. Could be a bot or someone with lot of time on hand.
It’s time to put some rule in place about how many post can be posted in a day or in succession.

I doubt it is fully human activity. There probably is a human who tweaked a script to attack this particular site and tweaked a list of phone numbers and text but then just left it running.

They will keep it running til it’s fully blocked.

If it’s a distributed attack then it’s from many IP addresses, you can’t stop it initially, but this attack is so volumeness it will by now be repeating from the same IP set. Or it’s from one IP. Either way, there is no need to allow this to sustain this long.

Therefore the administration is inactive.

That’s really weird, especially as this falls right after a spam attack on soundcore…

The spam threads are now in the thousands, and the clear button is too far down for me to deal with…

Edit: I just realised the desktop site has the option to clear at the top, so I don’t have to deal with that anymore. I might see if I can block all the of the spam accounts

That is insane. So thankful for that “Dismiss New” button being up at the top of the page.

how do you reverse “Dismiss New” if needed?