The World's Most Compact 4K Laser Theater, Grab Your Perk Now on Kickstarter! 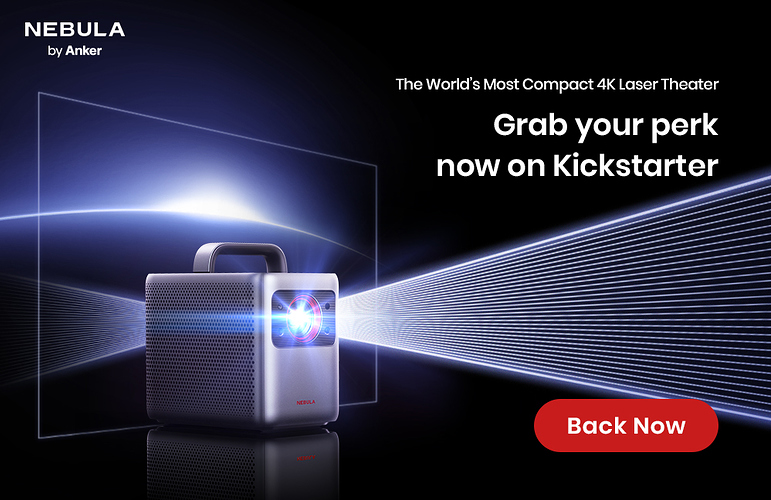 Laser power has activated a new era of cinematic brilliance. Introducing Nebula Cosmos Laser 4K, the laser theater where you can stream your favorite shows anytime and anywhere.

The Super Early Bird discount has already sold out, but you can still grab the 30% off Early Bird deal or a bundle with either Projector Floor Stand or 100-Inch Screen. Act fast before you miss your favorite perk!

Can’t wait to see this in action

Are you joining that “action” (Act fast before you miss your favorite perk!)
to have a chance to see this in action?

Same here, it sounds amazing so far. I’m hoping that picture is really that nice and bright.

Lol no way. This is too expensive for me. Besides my Astro Mini is doing just fine lol

It better be for that price

This last 2 years I have re-done a Cosmology course and done a Quantum Mechanics course. My head is in shame I’ve not yet got around to a Thermodynamics course but I do understand the principals including Entropy.

There is an inherent set of conflicting physical issues with a product which makes a centrally generated light, with that image being sharp (diffraction, collimated) with high frequency with power consumption and cooling (efficiency, fan, noise).

Shared image observation settings have been around for over a century but they have all been done in either night or artificially darkened spaces (drive-in cinemas, cinemas).

The advantage of doing in the dark is the human iris is open and itself makes a blurred image on the retina so you perceive less that the source is blurred. If you make the source brighter so can be done in brighter places, then the human eye will more easily detect lack of sharpness.

If you do increase the brightness and resolution you have to (in this universe) increase power consumption. That will force to be less portable, larger, and more cooling.

At what point does increasing image quality force non-portability? If it ceases to be portable then at these level of costs there are alternatives (flat panel static).

It is physically impossible to make as sharp an image via a reflected image than from a direct image. The photons diffract on their way out of projector and on the reflection. “4K”?

So long as this is all accepted by the consumer, that you must suffer a worst image quality, then fine.

For me, the fact that this is marketed as ‘portable’ implies that the venue/setting it will be used in will be sub-optimal. Outdoor portable screen / garage door / blank non-white wall / bedsheet etc.

Therefore, I was never interested in the 4K option as, in my view, that’s only warranted in a permanent and/or dedicated setting. The 1080 version appealed to me.

But the kicker, for me, is that portable projectors need off-grid capability (i.e. an internal battery) and if you need to lug both a projector and a 5kg powerhouse with you, that stretches both my investment and my definition of ‘portable’.

If they had made this model short throw, that would perhaps have offered temptation to part me from my money but, for the way I personally use portable projectors, I’ll stick with my current Capsule/Mars options.

All that being said, I do look forward to some decent reviews.

The amount of precision to throw an image on a wall at 4K is extremely high, far more challenging than just making a LED pixel 0.5mm wide instead. A pixel tolerance far less than 99.97% accuracy is not going to be visible on something 0.5mm wide from 6 feet away, while any challenges in not getting to 99.97% accuracy when thrown from 6 feet away is going to be more obvious as a fuzzier image.

The 1080 version appealed to me

Yes that is much less likely to fail to meet expectations.

Looking forward to reviews from owners which the Kickstarter page implies April (shipping March then time to review).

I use mine from time to time connected to 2 Flare mini.
Good performance, when watching music videos.
For me its really OK.

My existing nebula projectors (Capsule and Astro) are working well, with the Soundcore speakers, no complaints, and dont have the $$$ for the 4K projector now

I am not such a cineaste, so the Astro I really Ok for me.
More important is the sound and I create it with the TWS Flare mini.
I remember you gave me some good hints when starting with the little Astro.
Was very helpful.
But we all know, we help each other as good as we can here in our small but excellent family.

Disappointing that an established organization turns to KICKSTARTER as a funding source. In my opinion, it lessens your brand equity. I thought you were past the start-up phase?

Yeah it gets the job done and I got it for free so I can’t complain.
Hope you have a great weekend

Sure I will!
Have to do some repairs here in the house.
There is always something to do.
When I finish upstairs I have to start in the basement again.
Its good I can do a lot of myself and got friends who are real specialists.
Even my physician is a very good friend of mine.
Helps a lot.

Anker Heavily advertised the 40% off discount and promised to go live on the 11th. They ended up going live around mid-day, only had a handful of units at that price and that got sold out quickly to anyone off the streets.

As a long time customer who has bought at least 4 projectors from Anker (minimum being the Mars), i’m really disappointed with how they went about things.

Sounds like a busy weekend lol. At least it will keep you occupied

A true pensioner is always occupied.