The Wait is Over For Wireless Wonderment

While we can’t claim quite yet to have realized this vision of a wireless world, we can at least say that when it comes to charging, our newly released duo of PowerWave II Pad and PowerWave II Stand are bringing us one step closer.

Keep reading below to find out what exactly makes this latest generation of PowerWave so special. 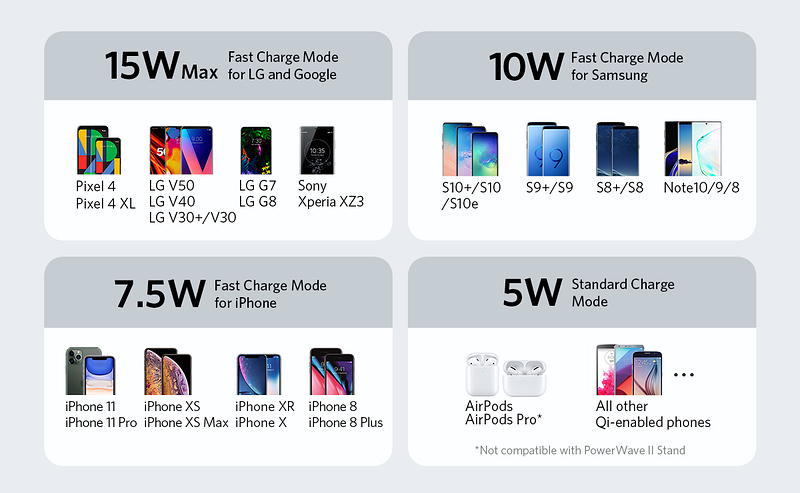 Both of these awesome new wireless chargers are available now on Amazon, and you can get up to 25% OFF if you grab yours before February 29th!

A truly effortless way to charge. Simply put your phone or AirPods wireless charging case down on the center of the pad to get started.

Get greater choice over how your charge. Watch videos or movies while charging horizontally, or switch to vertical charging for messaging and facial recognition.

Let us know what you think in the comments below!

Nice offer. Looks good and looks in line with the new Anker power banks. Interesting that they supply an AC adapter for the stand instead of using USB-C PD as a power input.

I’m not sure why companies are slow in adapting/migrating to USB-C across the board.

a world without massive clusters of cables stashed behind TV stands or office desks,

So instead of the cable going to your phone, you keep that cable, it instead goes to a stand which your phone uses. No cable gone. A stand added. Also if you replaced a port on a multiport charger, you’ve added a charger too.

I get we remove task of plugging in/out a cable, but it is not actually less clutter, it’s actually more clutter.

The only way to be less clutter is if one stand, or a mat, did multiple things liked charged wireless buds and smartwatch and phone at the same time so 3 cables became 1 cable.

Interesting that they supply an AC adapter for the stand instead of using USB-C PD as a power input.

Cost I suspect. Wireless charging is less efficient, to get 15W they supply 24W in. So they’d need to sell a 24W+ PD charger with it, costing more than the 12V 2A they bundle.

without drawers stuffed with charging cables

The charger supplied will end up in a drawer eventually,if you made these USB PD then someone could reuse the charger / cable. Please don’t exaggerate, this is just convenience of not connecting a cable, nothing more.

I’m gradually switching all my wireless stands and pads to usb-c instead of having individual power supply for each of them so those are not for me but I like the design of the stand, Anker should sell one as stand only but with usb-c input

I like the convenience of wireless but I not bought a wireless charged device since about 2014, when the Google / LG Nexus 5 and Nexus 7 had wireless.

I quite like the idea of tablets which do wireless out, they tend to have bigger batteries.

I’m not sure what you mean a world without a bunch of cables… You still have to have a cable to power the pad/stand. With this setup, I can’t use my old charger that has the power to charge these devices I have to use the over sized plug. That old charger and cable will get tossed in the retired tech box I purchased the new pad the other day and that’s what happened.

Plus that plug and transformer are freaking huge. The bottom of the transformer blocks the lower plug so it always has to be in the lower outlet and it sticks pretty far from the wall.

Other than that I like the pad and I will have a review for it soon. It seems faster than my older Anker charging pads.

Seem like good wireless chargers. I already own too many though

I’m not there yet

Thanks for the suggestion, for the reason of cost and also because we want to provide more matching and stable inputs, so we chose DC Power Cord.

Wireless portable charging has to suffer that wireless is 2/3rds the efficiency of wired.

So say recharging wireless buds, or its case.

The tipping point is going to happen in 2020 as some phones become fully wireless, no physical ports, no USBC no headphones, eSim.

Then those phone buyers want wireless everything.

Me too - I fully expected this to be usb-c

Cost I suspect. Wireless charging is less efficient, to get 15W they supply 24W in. So they’d need to sell a 24W+ PD charger with it, costing more than the 12V 2A they bundle.

We could have used our own PD charger and leave that DC adapter out.

That’s the convenience and simplicity of using USB-C PD. And one less Adapter to carry if you transport this device.

Even if Anker make it IQ3 input.

I agree, Anker is part of the problem too often, selling items with non-PD input. But see it from their PoV. That 24W charger from an OEM cost them in the region of $2-$3. If they made the pad have a PD or IQ3 port rather than a dumb 12V 2A port they’d have to add some voltage regulation and buck-boost converter, adding about $2-$3 to the cost so the net product price would be about the same and require a port from a PD charger. That per-port cost to us currently around the $15 level so we’d be roughly $15 worse off.

What is requires is us the consumers deciding to not buy it to force behaviour change, because cost is usually the first choice and then for same-cost then quality / reviewer ranking.

I’m just tired of the slow response to USB-C worldwide. It’s been around for a few years and NOT yet universal, thanks in part by Apple’s slow Lightning port and the ancient use of Micro USB.

The less adapters we have to carry, the better.