The SoundCore Liberty Lite are the smallest and lightest truly wireless earbuds yet from SoundCore. 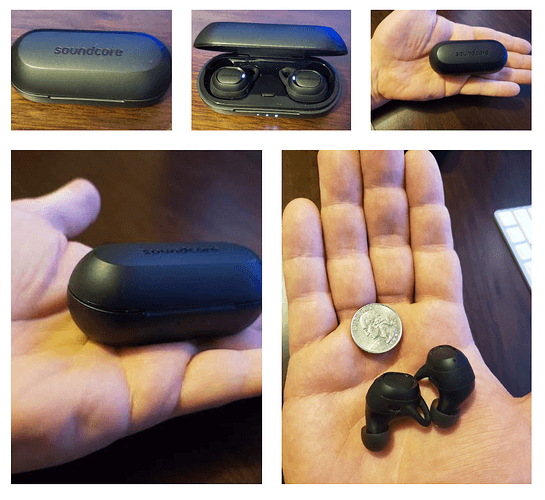 I received a pair from a contest on Anker’s forums, and I have to say I’m really glad I did. Here’s what I like about them:

Keep in mind, these are not Active Noise Cancelling (ANC, like the Bose QC models), but you know what? IT DOESN’T MATTER because the noise isolation is so good. I don’t know what they did on this model, or if my ears are just perfectly fit for these, but I got GREAT noise isolation while wearing these. A quick story:

I was setting up a video production studio in the library of the college where I work. I had a camera plugged into a monitor that had speakers on it, but I had forgotten that. The mic on the camera and the monitor started feeding back, loudly. So loudly, in fact, that a student came in from outside of the studio to ask me what was wrong. I was sitting right beside the monitor, listening to the SoundCore Liberty Lites, and I didn’t even notice. This was not quiet feedback either, it was a loud, shrill whine. I would even caution those that need situational audio awareness at against using these. They’re that good.

These are really small. Smaller than the head of a dime, in fact: 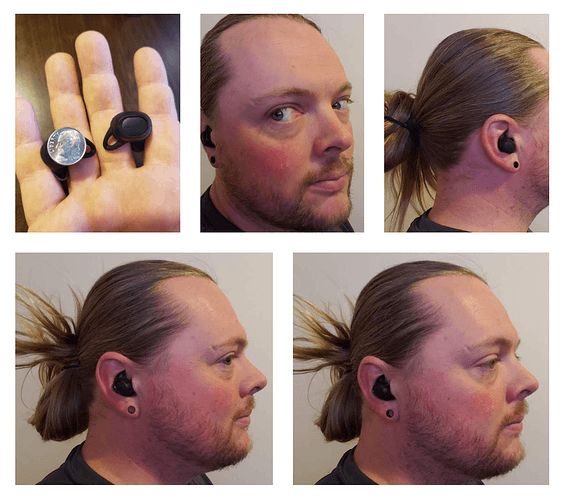 I was really surprised by the sound that comes out of these little guys. The bass is deep, the highs are crisp, and vocals are clearly audible. Usually when you have a set of earbuds, you have to make sacrifices in one area or another. Not so with these – it seems the idea was to make a REALLY GOOD (not GREAT) sounding set of earbuds that would make the $60 price point worth it. When you consider that these little guys are about the same form factor as the twice as expensive set that Samsung is coming out with, that’s a pretty good deal. Of course, they fall short on inductive charging, but I’ll cover that in cons, below. I doubt any other truly wireless solution with this form factor will match these in sound quality.

Aside from the set of ANC over-the-ear headphones I own, these are my first truly wireless earbuds, and boy do I love it! Most of my time is spent wearing SoundBuds Curve (which do have strengths over these, more about that in Cons), and I love being free from that wire, especially because I have long hair. I’m always getting tangled in the wire and that’s annoying, to say the least.

The charging case is absolutely necessary with these earbuds. Their battery life is lacking – the longest I got was 2.5 hours of continuous play at 75% volume. BUT, the charging case makes up for that. As a way to store them, it’s essential – I would definitely lose one if they didn’t have a good case. As a way to mitigate low battery life, it’s also essential. I was bummed out when they ran out of battery halfway through my workday the first time I used them, but on the second day I simply put them in the case every time I wasn’t listening and VOILA – they lasted all day.

There’s a lot to like about these things, but they do have some drawbacks:

Very good review and pictures. Keep it up

Great job with the review and pics.

Great review and congrats on the big win. I am very intetested in getting a set.

Good review, glad you pointed the cons, some reviewers don’t do that. I’d still give them a shot though

Good work you made!
This is the way reviews should be written.

Positive and negative aspects as well!

The interrupted connections could be caused by other items
as micro waves, WIFI, DAB etc.
Who knows?
Nobody knows.

Another great review and photos buddy!

Another possible con with the pair I have is that they don’t hold their charge very well if they are left for a week or two.

I have a pair too, I absolutely love these, I have one earpiece in while I work and swap them around when the battery needs charging.
I haven’t had any connection issues you’ve mentioned, I use them mostly on an iPhone 8+ and a occasionally on MacBook Pro.

Thank you Anker for such an awesome product

I have one earpiece in while I work and swap them around when the battery needs charging.

I just read this thread the other day though and it got me nervous about the metal screens in these things!

Saw this on reddit reddit link @AnkerOfficial Does anyone know or have update on this? sounds scary. [image]

@ryandhazen that user had to have removed it at some point for cleaning and didn’t glue it back into place. I played with mine to see if it would just come out and it doesn’t, you have to pry it out to remove them

Yeah it seemed like it would take quite an incident to remove the screens from mine.

Nice review with the pics!

I thought about letting it down, but didn’t want to have the “Fabio” look - I thought it might distract from the earbuds