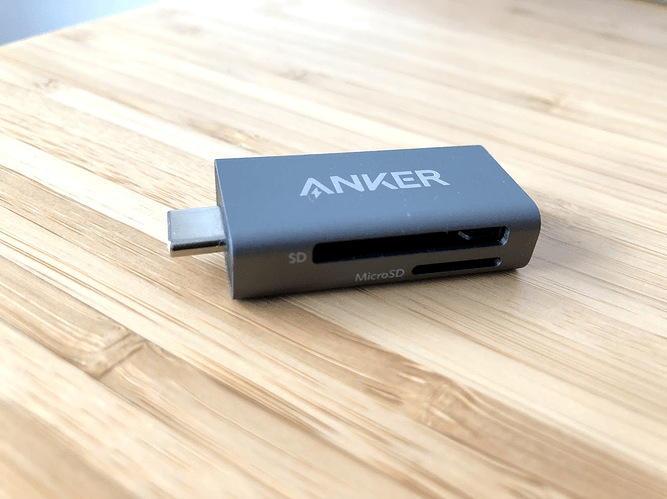 I’ve recently changed my reliable 2012 MacBook Air for a 2018 MacBook Pro - because I needed extra processing power and RAM for the Coding Bootcamp. With it, I was forced to make a sudden jump to USB-C ports, which is all the MacBook Pro has. I had my computer hooked up on an external monitor via the mini DisplayPort, an Anker Aluminum 3-Port USB 3.0 and Ethernet Hub and a powered Amazon USB hub - Anker’s wasn’t available when I purchased this. So, I had to replace all those cables and adapters with USB-C versions.

After lots of reading on USB-C hubs ranging from three different ports to every kind of port you could possibly need in one single adapter, I realized that, no matter how reliable those are, maybe putting all your eggs in the same basket wasn’t advisable. If the adapter failed, you had nothing - and I had read some reviews saying just that. So I opted for taking advantage of the wealth of four USB-C/Thunderbolt 3 ports on my new computer and keep things separated. Plus, purchasing a bunch of adapters ended up being less expensive than just one to do it all. So I got these:

With that, I had once again everything plugged in and working - plus the power source on one of the ports. Those two adapters do their job as they should. Then, there was only one port I once had still missing: SD card reader. I won’t rant here about how Apple could easily include one on the new Macs. But I still have one USB-C port free! To replace that port - I take lots of photos with my DSLR, so I really need it - I purchased the Anker 2-in-1 USB C to SD/Micro SD Card Reader. So here’s a quick review.

The thing earns points right off the box for its portability. It’s so small one wouldn’t believe it will do the job. Still, it’s very well made, with solid aluminum casing, giving it a mix of extreme lightness with sturdiness. It’s also beautiful! Simple design has its merits, and we can see the design team on Anker did a good job here. 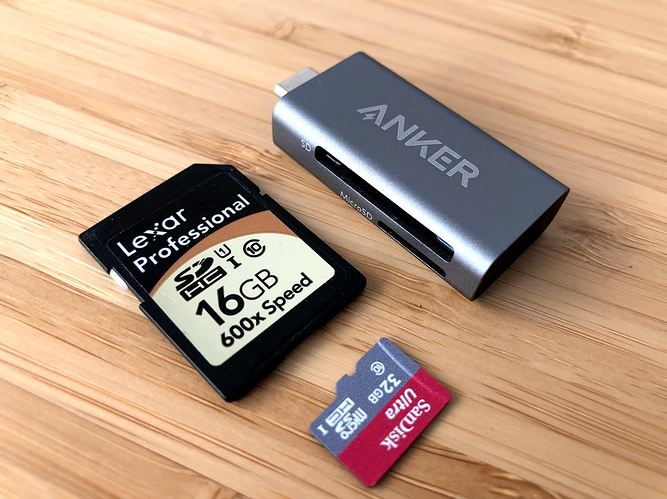 The SD card fits snuggly in the reader, with about 3/4 of it outside. MicroSD cards also fit snuggle, with about one third of it outside. No spring action on either, which is good specially for the MicroSD - those springs can sometimes eject the tiny little cards to far distances. One small annoyance: the MicroSD card goes upside-down relative to the Anker logo on top. So, if you have both types of cards inserted, each one will be with a different side facing up. No idea why they went with it, maybe something to do with the electronics inside. It’s hot swappable, meaning you can have the card reader plugged in and change the cards. Seems like an obvious behaviour, but for some reason quite a lot of card readers doesn’t work that way - you have the take the whole reader to swap cards. You can also have both SD and MicroSD in at the same time, both will show as external devices on your computer. I didn’t tried copying from both cards at once, but I don’t see it being a make or brake feature in case it lowers the speed when copying from the two cards. 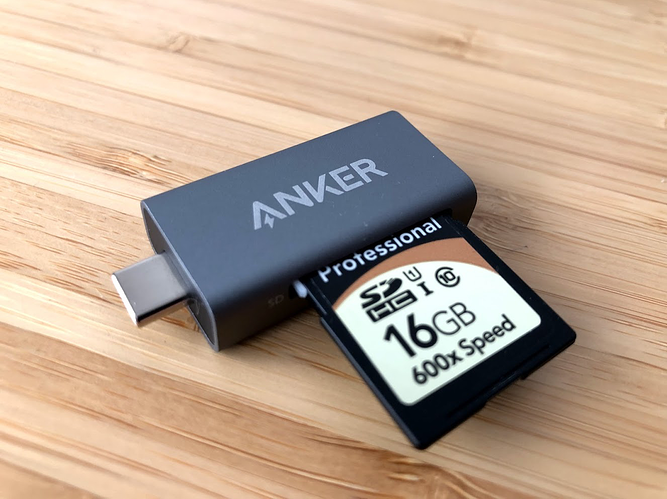 Speaking of speed, it works extremely well, blazing fast. Copying 3GB of files takes no more than a couple of seconds - I’m a trigger happy photographer, coming back from any shooting with hundreds of shots. And I shoot RAW+JPG, so I always have large volumes to transfer. And I also shoot some video with a GoPro - 4k video, which generates enormous files. No hiccups whatsoever, either with large volume from several files or from a few files. This reader is faster than the one on the MacBook Air - surely the new transfer protocols’ blessing. It makes my work flow that much faster. Or it would, if not for the single negative aspect I can talk here: the plug.

Since the plug is directly on the device’s body, you need a USB-C port with at least 1cm distance between the neighbouring ports to plug it in without having to take something out. That’s not the case with the MacBook Pro - and I’ll guess not the case with many modern notebooks. The distance between the ports on the MacBook Air is 6mm. The USB-C plugs on most devices has a 1mm casing on the sides. The Anker card reader has 6mm to each side of the plug. So, because of 1mm, I have to remove a cable to be able to use my card reader. 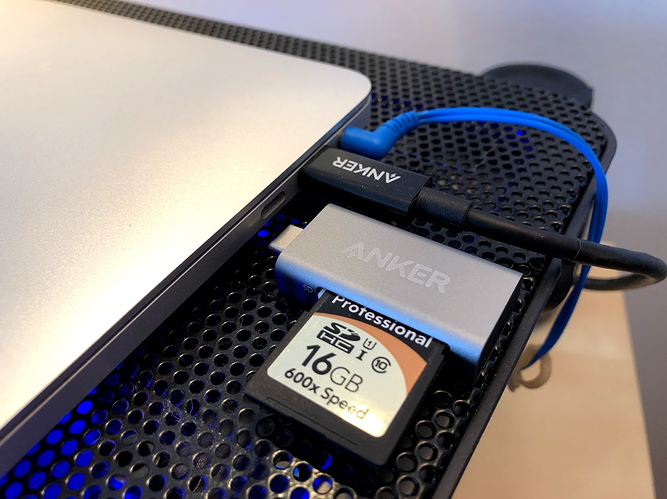 Oops, no space! 1mm really can make a huge difference.

Sure, it’s not the end of the world being without an external monitor for a few seconds, but still, it would be even better if I could just plug it. Had Anker put a small cable on the adapter, with an average plug casing, no one would have the problem. The adapter would still be small, portable and beautiful. A solution to appeal to all could be include in the package a small - 2-3cm - USB-C extender. Something like this, but with a USB-C female side. I’ve actually been looking for a cable like that - Anker doesn’t have one - from a reliable brand.

So, to sum up: a great adapter with enough speed to satisfy even pro photographers/videomakers, with the little annoyance of not being able to plug it in if the neighbouring port is in use. It works with SDXC, SDHC, SD, MMC, RS-MMC, Micro SDXC, Micro SD, Micro SDHC Card and UHS-I Cards - virtually every protocol in use. At CAD17$, it’s a no-brainer if you need a card reader and have a USB-C only computer, or if you want to use it with your USB-C smartphone/tablet.

Now, while multiple adapters/cables works well if you have multiple USB-C ports and your computer mostly sits at the same table, I do realize a multi-adapter will be way more practical on the go, so I might end up having one of those, too.

Thanks @tiagomota, good review, was looking for one of these for my Macbook pro

Do you have any way of seeing if a usb-c phone sees this as a storage device? I am trying to give advice to a friend for backing up a pixel (aside from cloud) and was wondering if this would work.

Do you have any way of seeing if a usb-c phone sees this as a storage device?

The description on the Anker website says it works with Samsung Galaxy S9, so I would guess it will work with a Pixel. Can’t confirm, though. It’s likely someone commented about it on Amazon’s review section.

Since the plug is directly on the device’s body, you need a USB-C port with at least 1cm distance between the neighbouring ports to plug it in without having to take something out

Unfortunately, I think most card readers that are this style, will prevent you from using extra ports. Perhaps if they use a little L bracket styling, it would allow you to plug it into the last port. But then how sturdy would that be? Great job with the review, as always

“Muito Obrigado”
Thanks a lot.

Another great review, thanks @tiagomota!

Great review! Thanks for including the pictures for scale. True that Apple could easily include a card port, and those micro sd c cards all come with adapters these days. Just another example of Apple leaving out stuff lots of us would use.

I use that hdmi adapter as well. Thats a heck ofba product too!

Hey kids, I have a game camera at a seasonal vacation spot and like to check my photos from time to time… I have a USB card reader from a couple years back that is not from Anker and when I install it into my Galaxy s9 it will allow me to access the files via file manager but it usually kicks me out every minute or two… I can rarely access more than a couple files before it wants to disconnect for whatever reason… I think it is just a bad connection via USB C however it does this even when I have the phone mounted on a magnet and don’t touch it. Maybe a handshaking issue??? , just guessing. Maybe a defective device… Should I just get the Anker and see what happens…@ankerofficial