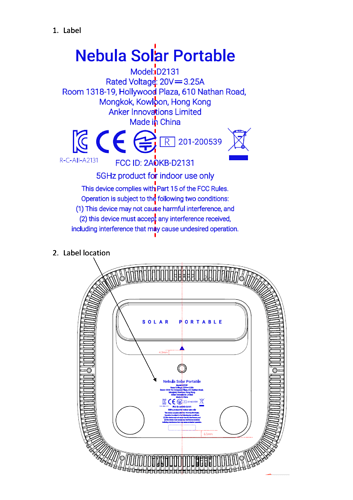 This is Nebula’s first portable projector with a 1080p FHD resolution! The battery capacity is believed to be 6700mAh. There are also indications that this may be using Bluetooth 4.2, and the input could be USB-C; however, those specs have not been confirmed. Stay tuned for updates as the release nears.

Nebula’s Solar series is expected to be larger than the Capsule series but smaller than the Mars Series.

Are you interested in Nebula's first portable projector with a 1080p FHD resolution? Be sure to let us know with a reply! Note: Nebula is also developing Solar (non-portable), Vega (non-portable), and Vega Portable. Nebula's Vega series is expected to be less premium than the Solar series, but details remain scarce at this time.
5 Likes
FCC ID 2AOKB-D2131 Nebula Solar Portable by Anker Innovations Limited
ikari04warrior September 10, 2020, 11:52pm #2

I’m excited to learn more about this

I have always bought anker products like power banks,eufy 11s and now backed the cosmos max.
I would be interested in a non pixel shifting native hd battery/solar powered projector…
A 0.23 dmd chip is not native 1080…
Pls advise chip n controller

I was confused by “Solar” @Insider

@Shenoy are you back to original name?

Yeah, I don’t think it means solar input, but who knows, maybe?

yep, back to old

Alright, @professor, we need your help.

The FCC test report reveals that Solar Portable has a battery capacity of 6700mAh. This seems quite surprising given Nebula’s other projectors:

How could Nebula possibly deliver a reasonable playtime at 1080p with a 6700mAh battery?! Assuming decent brightness and a smart OS (implied by Wi-Fi), I cannot fathom how this is possible. Do you suppose the processor is that much more efficient?!

Obviously I have to guess here.

The three most obvious reasons are:

Assuming no errors, then I’d recommend when this comes for sale, a method of keeping it going with some suggested Powercore is included so those wanting particularly longer operation know what to buy, such as a bundled option. Some Nebula models are compatible already, others need a non-Anker 5V-9V adapter.

Seems to be the 2 on the far right.

Yup! Im interested. Its somewhere in betwnn the twos acc to specs. That would be interesting.

I hope Vega is the older sister. Black is usually a more premium color, and white is usually a more lite color. I’d like to see the Vega with the same 1080p and AndroidTV 9.0, but 500 ANSI lumens, 2x 4w speakers, autofocus+keystone, and 4-5hr battery life. An official case for the Solar/Vega and Solar/Vega Portable would be great too!

The Vega is announced on the Anker Japan website! Use a web translator. https://www.ankerjapan.com/item/D2121.html