… strangest thing, my anker bluetooth speaker (note this isn’t the version two , it’s version one ) works it pairs with devices and plays sound… but the led light isn’t blue anymore it’s red … it started out blue as per normal when I received it brand new, charged it for the first time, and after the charge the led light shows up as red … I’m guessing (hoping?) the light will flash like it’s supposed to when it comes time to charge the speaker again but in the meantime… anyone else run into this sort of issue?

A steady red means it’s charging. If you have it out of charger and it still has a steady red, I would recommend you reset the speaker by pressing the Bluetooth button for 3-5 seconds

My apologies for the late reply, for some reason I’m not receiving notifications in my email when someone replies to this topic not sure what I did wrong

Thanks for the info on how to reset the speaker, that was one of the tactics I tried in desperation to make the red led light return to normal

but it’s good to know this is the “official” way to reset the speaker, sadly it didn’t work.

Now here’s where things got really confusing for me (though to give anker customer service credit they did replace the speaker for me … twice…). I did email anker customer service about this and they said that the red led light in the front has nothing to do at all with it charging, it only has to do with whether or not the speaker has connected successfully via bluetooth and when they told me that my reply was " Huh ?" …

The first speaker they replaced (cust. serv. rep. only figured out after having it sent in for replacement " Wait a minute, even if you’re only using it 10 minutes a day it’s still going to need to be recharged every 4 days, this didn’t need to be replaced in the first place" … I think s/he was a well meaning but inexperienced cust. serv. rep. new to the job) … the first speaker was steady blue when connected, red four days later when I’m guessing it needed recharging, then blue when recharged and connected to a device (blue led light in front of the speaker I mean).

This is where my stupid question comes in - that’s the way the speaker is supposed to work as far as the led light in front right?

… I’ve seen other posts on this forum with similar issues, red led light stays red all the time ) … ironically too the rep did not share your helpful info as far as resetting (which didn’t help to begin with but it worries me a bit that it did not occur to the rep to tell me this).

(apologies should have been clearer about that in the first post)

sorry for the triple picture post I wasn’t sure which of the 3 formats would show up best - direct link, html link or bbc link - so I did all three 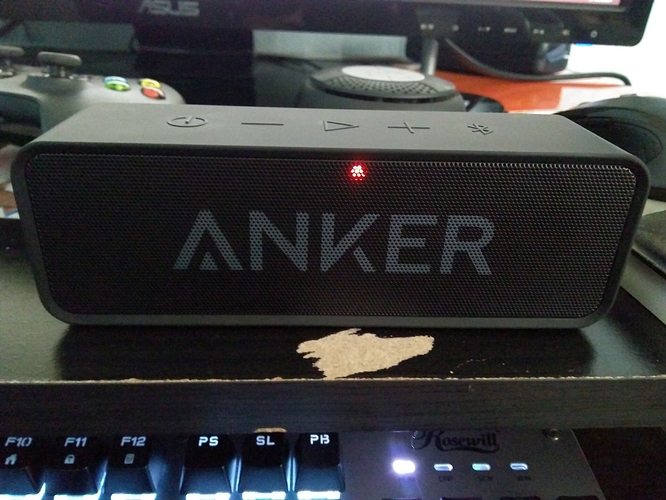