Soundcore Mini Issues: no sound, not working at all

I think I figured out a problem for this.
Problem: One day my soundecore mini just stopped working. When I turned ON the power button there was no LED indicator for bluetooth or low-power
I connected USB charger and it showed the white LED (weird it should be RED if it was out of charge).
So I thought it was some issue and left to charge and tested again. It did not work.
Tried with charger ON, powered ON and AUX cable. Still did not work.

Debugging:
Opened the back of the device. There are three screws under the anti-slip ring (-1 point).
Then there are three cables glued (-1 point) to the PCB. But I guess it’s important to avoid disconnecting by music vibrations (+0.5 points)
Removed all the connectors.
Red connector: Battery
White connector: Speaker driver
Ribbon cable: Media control buttons

After playing around with it for a while, I noticed the speaker worked with the RED connector unplugged but speaker powered through external USB charger

Probable Cause:
I noticed that when battery and charger are plugged in, the chip U3 on the PCB gets really hot.
That’s lp28056s which is battery charger. So I am guessing the problem is with that particular chip.

Current Status:
Now I removed the battery from the speaker so it has larger empty space to vibrate.
Resealed the holes to not leak any air.
I use this with my external battery pack or always plugged in to the wall. 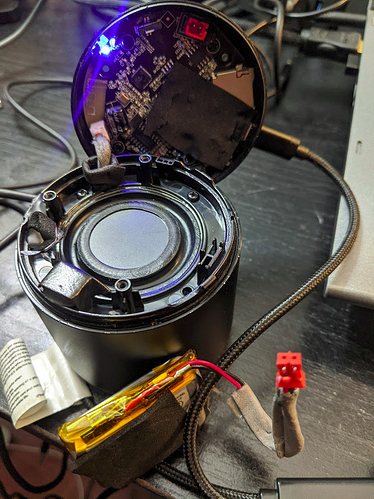 I always love it. when someone is able to repair something.
I was taught by my father to try to repair.
So I am not able to repair all things, but some.
I always try.

And meanwhile there are so many videos around helping a lot.

So if someone is skilled, one can do such a lot and avoid
to increase all the trash our world is flooded meanwhile!