Yeah there really are so many great entries!

I was gonna enter but completely forgot to take the pictures when I had a chance, oh well good luck all who entered

I respect the hustle. IMO this ain’t cool at all…
But at least he asked nicely so I shall consider his submission. 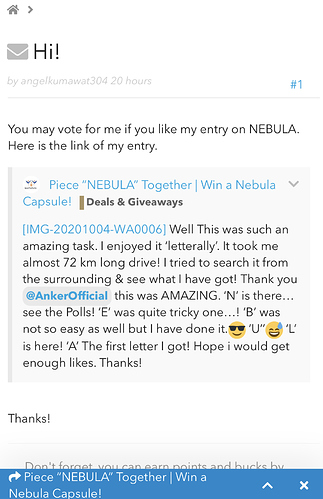 Oooooooo I kind of agree especially since this isn’t solely decided by likes I was hoping we were avoiding people asking for likes in the future.

The power draw, free item giveaway draw is hard enough as it is. @professor I demand you summon PROTECTO AND INVESTIGATE THIS IMMEDIATELY!!!

The Winner will be chosen based on the originality and creativity of their photos, as well as the opinion of the admin and number of likes your photos get.

My though which is similar to @ktkundy which was based from above.

I think it’s all the factors play in. Like I doubt they will pick one with no likes but I could be wrong. But the rule is aimed to prevent all the fake accounts that had been popping up in other contests. Sure the likes help. Personally I just love when my things get liked because it makes me proud of my contribution. But there are other factors in play here

I tend to like photos for the effort, it isn’t easy to see the letters of the Alphabet in things without using actual letters

This competition is closed but you can still go back in and like. You can’t withdraw prior likes so there’s still chance before Anker makes their decision for bad behaviour. Because you cannot withdraw a prior like you cannot see then a later post and move your like so it tends to skew it favour of earlier posts, that’s a little unfair for a competition to bias earlier, so make these shorter competitions in future?

Good news, I’ve gone through the likes of the top liked posts and looked for a pattern. I cannot find any significant signs of anything untoward.

There’s only one vote which looks like it could be from duplicate account but it’s only 1 which is also entirely innocently consistent with a new user simply liking, it also has not skewed the result (not caused it to be most liked) so it harmless.

There are new users just liking, but they are liking multiple posts so that’s what you’d expect from new users simply liking, a malfeasant would like just their own posts only.

Congrats on the win @jpdicko

Indeed congrats @jpdicko for the creativity and the win.

Nebula team is behind me saying: Dang, we should have offered more prizes. There are too many good ones.

Indeed, there were other good ones, pity only 1 winner. 1st 2nd 3rd prize, and shorter competition next time?

Awesome win for @jpdicko for an awesome spelling of Nebula

There were so many great entries congrats to the winner. Even though I didn’t win I just want to thank everyone who liked my picture it was greatly appreciated. We really have so many creative people in this community. Also a special thanks to @professor for taking time to make sure that the contest seemed fair and that there was nothing unusual happening.

Fun competition nonetheless !
@AnkerOfficial since there’s no 2nd or 3rd place winners, Can you disclose information on the closest submissions?

Congrats to @jpdicko, hope you and your daughter enjoy the nebula. That was a really good set of pictures, and they were presented really nicely as well. Good thought editing / merging them into one picture, it paid off in the presentation.

Thank you very much.

Thank you very much for you kind words. We’re over the moon.