You can not all explain with pure science

Science is explaining. There’s either coincidence or causation, and correlation. Example of causation of the positive is “I won’t have a panic attack” triggers the attack. Example of causation to the negative “I won’t trip and fall” where you pay more attention. In both causes you can ask a group to do something and a group do nothing, and compare results.

You certainly can have correlation without causation, that’s how science learns. It’s how the early vaccines were found with dairy workers having different pox infection rates than others.

Correlation, but no known cause = area to investigate and find cause, net new knowledge.
Correlation with known cause = knowledge
Cause but not known yet correlation = scientific study, trials.
No correlation but claimed causes = mumbo jumbo, ignore as this is the path to idiocy where a claim is accepted without evidence.

Then I might ask a question
Can OUR LORD be proved by science?

Which one? Zeus? Osiris?

Hitchens's razor is an epistemological razor expressed by writer Christopher Hitchens. It says that the burden of proof regarding the truthfulness of a claim lies with the one who makes the claim; if this burden is not met, then the claim is unfounded, and its opponents need not argue further in order to dismiss it. Hitchens has phrased the razor in writing as "What can be asserted without evidence can also be dismissed without evidence." The concept, named after journalist, author, and avow...

Fortunately it’s now legal to use the scientific method. Phew, what a relief.

In Cosmology there is a similar issue, I’ve been following the last couple of years. The big bang has evidence but what caused it is was not known, the limit of knowledge being 380,000 years after the cause. It was speculated a scalar field with a slow potential energy drop (Inflaton field) which has no evidence. That is not science yet as it’s not a fallisible claim. String theory was proposed to unify gravity with quantum field theory, but it predicts supersymmetric particles which should have been found by now by the LHC and haven’t so the cause of the universe is not known. A wise man when hits an unknown cause says they don’t know and puts in effort to find out.

Had a Nano sized treat turn up today.
Look out for a review sometime soon-ish. 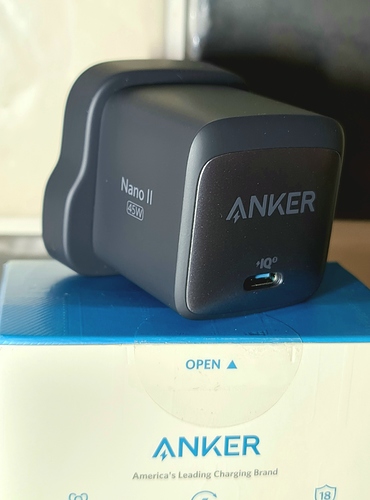 You think fastest charge for Samsung? Why not get the smaller 30W? Laptop?

Maybe, the into online suggests it should charge a Samsung at 45w, so we will see!
I’ll check it out a little more tomorrow.
Taken a few pics for size comparison purposes, haven’t even plugged it in yet !

Does your specific phone support 45W, they don’t all.

It’ll be ready for the Fold and Flip 3? Which should be announced at Samsungs Unpacked event next week.

Anker sent you as a tester?

I wish, I don’t think Anker Official took my hint from above

It came from my boss which was a nice surprise.
We were talking last week about the new releases. I actually got my facts muddled thinking the S20+ was 45w.
Thats the one she ordered so all good!
My Galaxy Tab S7+ takes 45w so that will suit that a treat too. Especially as Samsung were quite mean and only supply a 15w!

Understood. I do experience what is a design amiss with my 2.5 year old 10.8" screen Huawei Mediapad M5. It has 18W charging and while in use it barely does recharge, the larger tablets do need more power. Not an issue for my 6" phone or 8.4" tablet.

I bought a heap of technology 3 years ago pre current profit-taking shortage-caused technology costs, but eventually the devices will fail.

One of my bike lights failed today, a replacement is double the cost of when I bought it originally 6 years ago. This technology profit-taking price hike will hopefully end soon.

I hearing you @professor on both levels.
The bigger the screen the battery, although the battery life seems to reduce.
Apple does a good job of ensuring 10hrs of life on their iPads each year irrespective of screen size and processor increase. Others not so much, this Samsung gets about 7hrs web browsing with brightness set at one third.

New kit does seem to be on the high side across the board currently whatever the technology.
Currently looking at a cheap G Shock for bashing and crashing at work. This time last year I tried for a month and at £69.99, this year its been a solid £95.99.
It’s certainly a time to be patient if you can.

It came from my boss which was a nice surprise.

That’s a way to get things!
Now you can do some checks and publish the results here.
Well done Paul !

Thanks Franz. I’ll work on that over this week.

I got another start of the week.
My polish friends brought me a lot of wood.
So I need to care about.
But I love it.
The wood is free (Of course the got a perfect tip)

Thats nice of them Franz.
Wood for wood working or for burning?

They work for the city of München.
Restoring flats.
So there are piles of material which is delivered on pallets.
Untreated wood.
( No Euro pallets which are reusable and impregnated with
chemicals.)

Palet wood is quick burning and great to start the fire.
I use it in the wood burner in the garden, quick to light. Then dump a few chunks of hardwood on top.

Some rather large palet burning in Northern Ireland.