Eufy Security USELESS if their servers go down!

I an also getting an error message " unable to connect to servers" and now it has logged me out and I can’t log back in due to the error message. We are currently 3000 klms away from home on holidays and I’m unable to check activity at my house. I changed to eufy from Arlo pro as these cameras seemed to work better with better battery life but not when I can’t access them.

Looks like they fixed their servers, things are working for me again.

I’m having the same issue thought it was the update I received today. Live feed is fine can’t see the events tab (says phone not connected to internet) . When is eufy going to realize that unlike a vacuum that may leave a little dirt on the floor if someone is injured or burglarized and thought they were protected with this system it spells lawsuit.for us kickstarter backers are will still under our 1 year warranty? 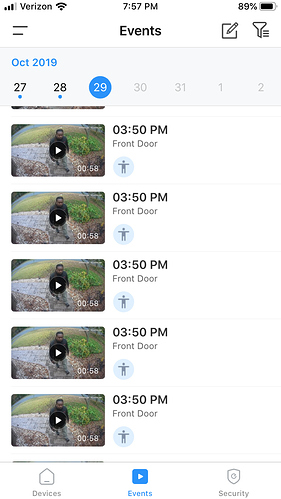 I’m curious as to how you people expect this to work without a server being involved?

How do you expect your phone to connect directly to your doorbell or homebase over the internet?

It seems after today’s hiccup, I now get notifications, but I no longer have any events to view at all. Even though I tap on the notification, and I see the clip that way. When I swipe over to the events window, there are none available.

I too am now getting notifications but no events recorded, I have restarted the home base several times and still no recordings. I thought all these issues would be finished when I changed from Arlo Pro to Eufycams but it seems I was wrong.

I too am very disappointed to learn that my Eufy camera security system is compromised by being tethered to the company server. I was attracted to the system because of the camera performance, pricing value. I was not aware that my home security would be vulnerable to a company server failure. As the OP says, this failure renders the security system USELESS! There must be some way to update the software with a server-less option. I feel let down by this unexpected turn of events. I don’t know that I’ll ever look at this system with the same sense of security again. But the server access/requirement must be mentioned somewhere. How could I have overlooked this aspect of security in buying this system? I’ll have to re-read the literature that came with the unit to see where I am to blame for making a buy decision that no longer meets my expectations. I had recommended this system to people, but it appears I’ve been wrong in my enthusiasm. It’s a good thing I had a monitored security service already in place. But that’s the only saving grace in owning this “stand-alone” camera security.

This is one of my biggest concerns about all of these types of systems. Complete reliance on the vendor’s maintenance and ongoing support of their server systems. Even to send you an email, their devices tend to go through their network servers.

I’ve only had my Eufy doorbell for about a month now, but haven’t noticed any server problems with mine. Has this been a regular problem for anyone? And does the doorbell still record video even if the server is down?

Finally, I have received the 2k indoor camera and now I can’t login and set it up…

Maybe set up the servers with failover, so they are 99.99% available?

Anyone know if the servers are down?

The Homebase is Offline I hit refresh and nothing.

This was not the issue in this case. So you have planned and unplanned outages.

Firstly, the Technical Archicture is a HA pair who sync mirror between themselves to handle a local server failure. They then async mirror to a more distant HA pair to allow for bigger problems (computer room issues).

An unplanned outage you’re down for the amount of time to enact your failover plan. It can be scripted to make it minutes.

A planned outage is a deliberate one where you do this:

That has been suggested in depth already.

"Unable to connect to application server." and phone and chat supports are down... What the flying f***? General & Product Discussion

So you’re using a server to get past the firewall? Or do you open the router port via uPnP and server is just for IP lookup? I can understand why a brief outage, while to switch to backup server and upgrade the primary, then another brief outage while you switch back, but the only way you need to have a long outage is if you don’t have a backup server. High availability pair synchronous mirror , mirrors asynchronously to another backup HA pair, does cause a brief outage but not a long outage. T…

Plenty us know how to make a synchronous replication local HA pair and it mirror asynchronously to another HA pair to minimise downtime.

It just needs both the will, then the budget, then the ability. I’d not be totally surprised if there’s a geek peer of mine within Eufy now who was refused some component of the Technical Architecture, warned about the outage it would cause and was told insufficient budget. They then are told-you-so and approved budget for the missing parts.

A plan, a roadmap, from Anker would be a jolly good idea, so admit the fault, explain the fault, then explain the steps to avoid. Simply “we know about, trust us” does not work as once trust is broken it’s gone for a long time.

I would expect the app on my phone to be able to connect to the HomeBase when all said devices are on the same local wireless internet. Yes, I know it is impossible to connect AWAY from home on cell, but if everything is local, why does it need to go out to the internet??

Does this mean that HomeKit still works when Eufy IT is down… anyone tried this?

Wow, new Eufy camera only user here. I tend to not invest solely in one company for security products. My home is rather fragmented with similar products from different companies should any company decide to do something I do not like I can at least rely on the others as I want to. Good to know that Eufy at least uses their own servers and they are not at the mercy of a sever vendor. I have seen this happen at other companies that sub out the server side of their business and even though they are responsible for their products they are not really responsible for the maintenance and status of the servers directly. So, at least they have full control over their system within their own company which is a good thing. I agree that their advertisements are a little misleading on this, making it look like no server is needed. Fact is you always need a server or DNS of your own in order to access almost anything remotely. If I had their security system products I would not like this at all. Perhaps they need to come up with an untethered solution such as a stand alone cellular connection like Simplisafe does.

Eufy indoor 2k cameras are down

Im also experiencing BIG ISSUES with these security camera system, my wired doorbell camera stopped working to the point where it went completely offline, it went dead, customer service told me it was my internet (wonder why because I have others wireless devices ,including 4 eufy cam E cameras around the house working just fine). They did replace it tho, but now when I try to open notifications, it laggs and takes forever to open up. I have to literally close the eufy app and re-open it to watch the videos. Once every other day I get “Unable to connect, servers down” message which is driving me nuts. This sucks because I have had some criminals rob stuff from my front porch and now the cameras wont work. I was really hopeful and happy with this system.

Seems to be a growing issue. I can’t even activate my doorbell due to server issues