Thank you, I just manually updated mine to 1.3.1[quote=“Rosarios, post:1, topic:69848”]
removed the ability to setup wifi facility for homebase
[/quote]

I was not aware of homebsae ability to setup wifi. Not clear what are you talking about here

If you look at the app release notes for 1.3, you will see it listed as a new addition. Essentially it allows your homebase to connect to your router via wifi as opposed to ethernet only. This may help those who have range issues with cams back to homebase as you can move the homebase to a central location rather than being tied to the physical location of your router. It’s kind of a half way solution to the much hyped/promised range extender that Eufy has promised in the past. Ps. You can also find it in the help section so it was there, albeit for one version!

Ps. You can also find it in the help section so it was there, albeit for one version!

True, found it in help now. Too bad they didn’t mention it anywhere. At least some body is tracking all these changes.
Have you tried to set the homebase on wifi? did it work? if so that will eliminate few issues of range and no need of rane extenders for at least few users.
Wonder why it revoked in 1.3.1 though?
I don’t see it anywhere in settings so where do you go to set the home base on wifi?
@yamyam you need to know this bro… good stuff hidden by eufy for you

First: It will not solve my hardcore low-range issue at all. I already have moved the Homebase to the “outer rim” of my flat. Now i would n ot only have to connect HB by wifi, i move also move HB outside of my flat to extend the range! No way.

Second: If connecting the HB by wifi to the router, it will make the already high lag even more worse. So not at all interesting for me.

Range Extender Hardware for the win! 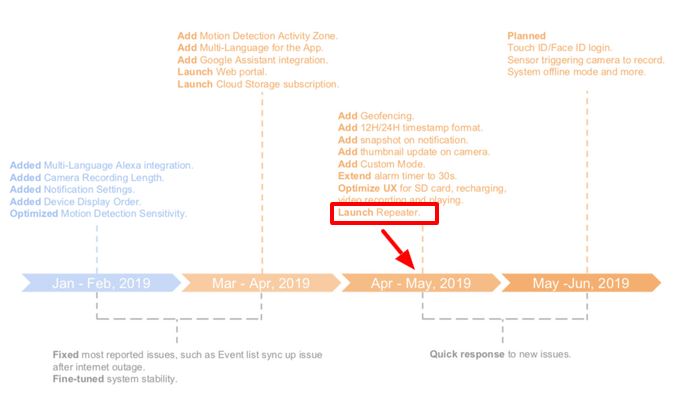 While saying this, i need to +1 the very good question asked by domeopc at kickstarter:

yeah, I agree, not for your case.

There seem to be a
eufy two class society ! 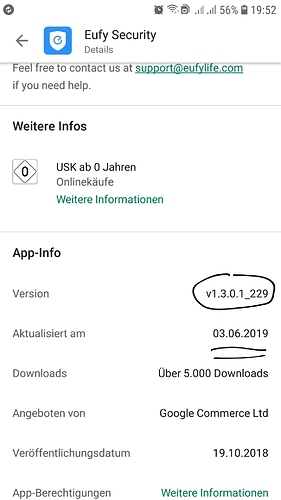 The only update we got TODAY was the homebase firmware update to 1.1.0.1 with the as always very sparse changelog: 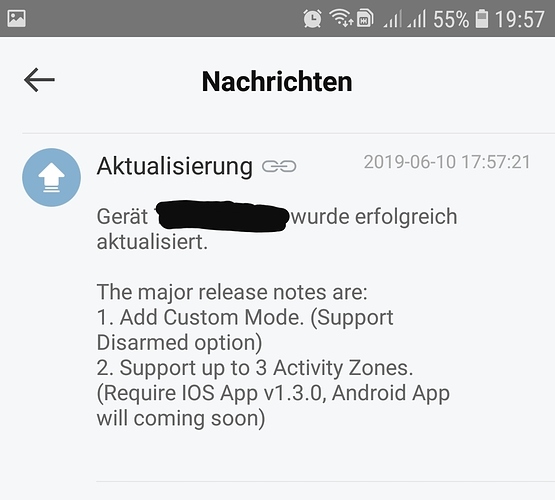 … i am having Android, and i am also having 1.3.0.1 already and also having Activity Zones already!

(even if they do not work as they should and expected, see: [eufy cam] Motion Detection Zones aka "Activity Zones" - Issues )

Hey just curious… Did you try turning off everything else wireless in your house and see if that increases your coverage? Including like wireless land phones or microwaves.

Thx for your idea … but this wont help at all

As said, i am living in a big city and in a downtown scenario in the district with the highest population in the city. So if i am turning of all my wireless networks and the microwave … i will still have at least a dozen wifis in my house and several hundreds private wifis, public wifis, mobile networks, microwaves and tons of other “stuff” around the house !

By the way … the biggest US ARMY BASE worldwide, outside the USA is located just some kilometers away from me, right in my “backyard” …

Ramstein Air Base is a United States Air Force base in Rhineland-Palatinate, a state in southwestern Germany. It serves as headquarters for the United States Air Forces in Europe – Air Forces Africa (USAFE-AFAFRICA) and also for NATO Allied Air Command (AIRCOM). Ramstein is located near the town of Ramstein-Miesenbach, in the rural district of Kaiserslautern. 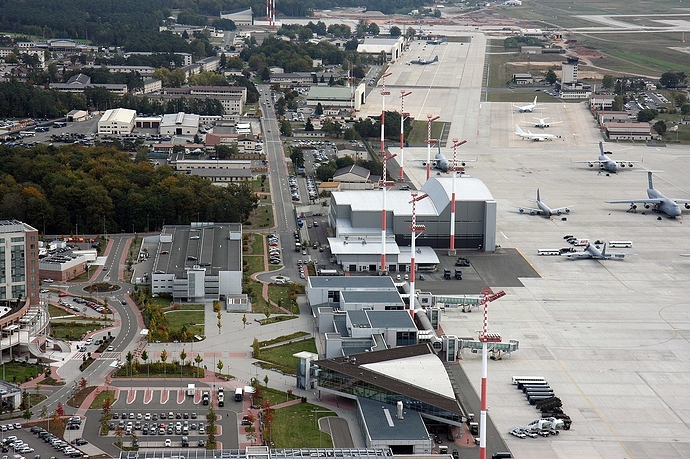 So i bet this airbase, their activities, the jets, the planes, the NSA, the antennas, and stuff, will also cause interferences in the whole area

… And just a view hundred meters away from my house, right up a 320 meter high hill, the germans operate a 100m high transmission pole: 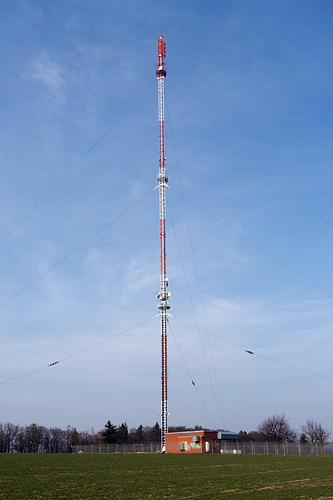 So as you can see, there TONS of reasons and interferences which makes it very implausibly that turning of my sweet little wifi will change a.n.y.t.h.i.n.g.!

But thanks for the sugesstion @The_Bearded_Tech_Guy

No unfortunately never got a chance to give it a go. Like many who have expressed their frustrations with the range offered by the solution, I thought this would go some way before we get the real fix that was promised with the range extender. I agree with @yamyam that the lag may not be a workable solution for everyone.

Ha, the NSA wouldn’t be interfering with your Wireless they want it working as optimal as possible to capture and… “archive” it.

I am curious what frequency the cameras operate at (probably 2.4 Ghz range). I sent an email to support asking, we’ll see if they respond.

This would be the worst possible frequency because the 2.4 Ghz band is full and mostly everything at a regular “home” is sending on 2,4 Ghz.

But i do not think eufy uses 2,4 Ghz, even if it is licence free (thats why everyone uses it). I guess 2,4 Ghz would need to much power … i think eufy uses a bandwith/band which needs low power, but therefore of course got a horrible range!

Yea, looking at the advertised range (100m line of sight) and the bandwidth used to transmit the 1080p / sound, I’m not sure what other bands would be realistic. I’m going to guess they aren’t going to license any bands for this (would be way too expensive and I don’t even know if that’s possible for consumer grade equipment).

The power savings is probably really coming from the camera only sending data when motion is triggered.

You forgot an interference type:

I’ll be curious to see what support says. Arlo uses 2.4 for base communication, cheap and easy usually wins.

You forgot an interference type:

Angry Network Engineer who read too many BOFH stories and keeps a wireless phone on their desk to walk around with it “off hook” at random times of the day.

I believe it is a low powered 2.4ghz, also aids in battery life as higher power it would drain the battery faster. Standard Wi-Fi protocol was never designed for low power, i think in last couple of years i have read some changes in this area though.
Probably something similar to the ZigBee protocol and could explain why it cant (and Eufy prob wont want to) allow users to connect cameras to existing Wi-Fi networks.

Back to main point, a friend bought a Eufy set based on it being touted as a fully wireless solution. Interesting he gets a poor signal on a single camera but still works.
I told him i was sure it had ability to connect to Wi-Fi as I too had read, but he emailed support only a day before new app was released and they said it is not supported. (above suggests i am not crazy)

I do find it strange, I have not seen a setting, short of resetting the unit back to factory and trying without a Ethernet plugged in, stranger why if it was supported or is capable why Eufy would remove this.
If it was an issue, then it should still be option for people to try with a warning, or advise why it can’t be done.
Really moving the home base closer to cameras is the only way short of the future repeaters one can improve signal.

are there any types within 2.4 GHZ such as low bandwidth or whatever, coz eufy did mention they use this private frequency which will save battery life and data transmission speed etc., no idea what it is…
2.4 GHz may be for the homebase to router (as an option), then homebase may be using another frequency to communicate with cameras?>

HYBRID is the magic (answer) 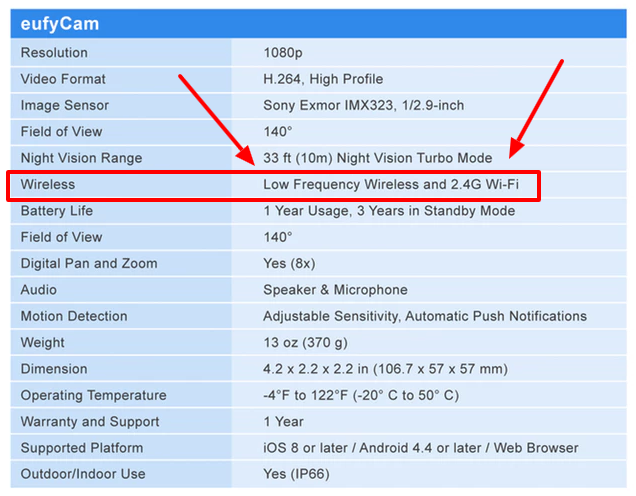 LOL… so is there a thing called low frequency of 2.4 GHz frequency… I’m lost, not a pro at this stuff… I admit

Support got back, the cameras do operate at 2.4GHz. So the power saving is going to mostly be in not transmitting all the time. That isn’t to say they don’t have other power saving technologies built into the communication channel, but they probably won’t be as great compared to just not broadcasting a lot. I am curious what is meant by Low frequency when in standby though, so I’ll ask that question. Would seem a bit silly to have two radios in the cameras unless the power savings is really that good.

Back to main point, a friend bought a Eufy set based on it being touted as a fully wireless solution. Interesting he gets a poor signal on a single camera but still works. I told him i was sure it had ability to connect to Wi-Fi as I too had read, but he emailed support only a day before new app was released and they said it is not supported. (above suggests i am not crazy)

I have never seen anywhere that the homebase would connect over WiFi. In fact even on the kickstarter FAQ it states ethernet only. It does kind of makes sense as the homebase having a WiFi connection could impact the cameras themselves. They would have to have two separate 2.4 radios or a 2.4 and a 5.0 radio in the homebase to not just cause contention between user access to the homebase and the cameras sending video.

are there any types within 2.4 GHZ such as low bandwidth or whatever, coz eufy did mention they use this private frequency which will save battery life and data transmission speed etc., no idea what it is…2.4 GHz may be for the homebase to router (as an option), then homebase may be using another frequency to communicate with cameras?

No, low frequency would be a lower frequency like 915mhz (operating frequency for Zigbee in the USA) or 908.42 MHz (Z-Wave in the USA). There are different bands within the 2.4 range and I guess you could argue the lower channels are “low frequency” compared to the higher channels but I would hope thats not the case.

I have never seen anywhere that the homebase would connect over WiFi.

I thought the same… go to help/FAQ on the app and wifi section, you will see it there, doesn’t say how you connect though